FIFA players love Wednesdays. Why? Because that’s FIFA 22 Team of the Week day, of course. Every week, 23 footballers that shone on the real world pitch get their own TOTW cards in FIFA, which feature boosted stats and a slick, black design.

For FIFA 22, there’s even the chance they could be a Featured TOTW player, whereby the stat boost is even bigger than the rest of that week’s team to make them even more desirable to players.

With Team of the Week being such a big and frequent event, FIFA 22 players are always keen to find out who they may be able to pack, who the Featured TOTW player is, and which players might be featuring in the next TOTW based off of their performances for their clubs. We’re here to bring you a complete FIFA 22 TOTW guide with all the information you need.

Here are our FIFA 22 TOTW 4 predictions! International breaks usually mean stacked TOTWs, and this week is likely no exception. The likes of Marquinhos, Mahrez, and Mbappe are all in line for an in-form card.

For FIFA 22 TOTW 3, we’ve got some extremely spicy players receiving upgrades. Luis Suarez and Son Heung-min are stars of the show with 89 and 90-rated TOTW cards respectively. 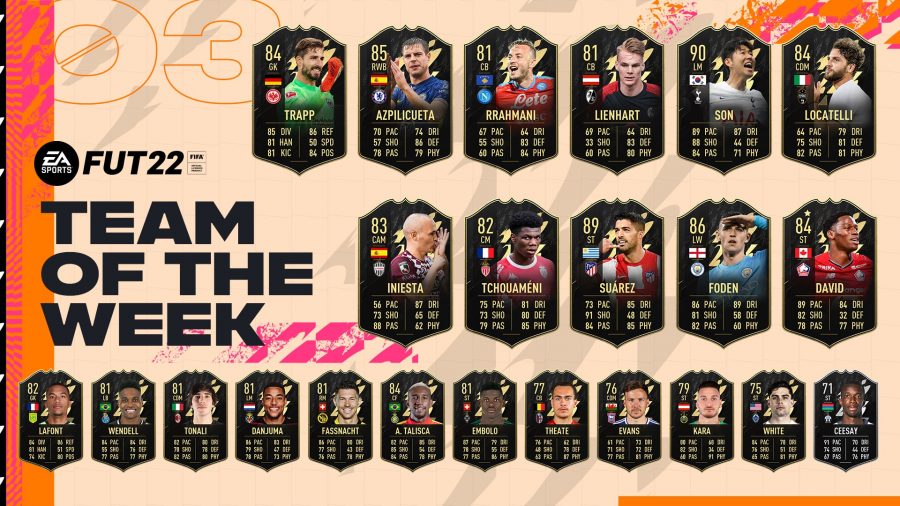 The Featured TOTW player for Team of the Week 3 is Jonathan David. The Canadian Lille striker jumps up to an 84-rated player and boasts some scary pace.

Featured players are distinguished by the gold star above their overall rating, and the enormous upgrade they get in comparison to the rest of the Team of the Week.

So that’s all the info you need for the current and upcoming Team of the Week in FIFA 22. Remember to keep popping back every Monday for our predictions, and may the pack luck gods be with you!