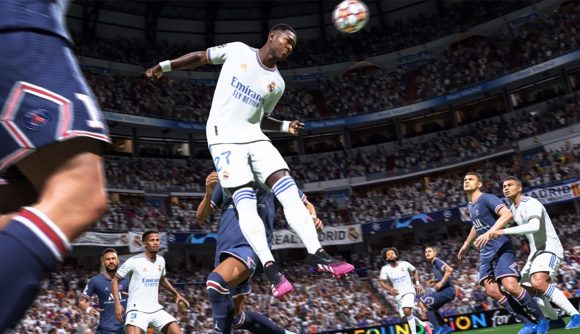 Another glorious weekend of football has passed, which means it’s time to rummage through the results and stats to see which players might feature in FIFA 22 Ultimate Team’s Team of the Week 3.

Last week we were spoiled with some great in-forms, such as 90-rated Karim Benzema and 86-rated rapido right back Jesus Navas. So now it’s time to dive into ourout FIFA 22 TOTW 3 predictions and see who will be earning themselves the illustrious black in-form card this week.

Some potential headliners for TOTW 3 include Atletico Madrid’s Luis Suarez and Thomas Lemar, Eintracht Frankfurt’s Filip Kostic, and a potential upgrade for Ones to Watch player Manuel Locatelli. Wolves’ South Korean striker, Hwang Hee-chan, could also feature and would be a prime candidate to be this week’s Featured TOTW player, getting a very generous stat boost.

Here are our FIFA 22 TOTW 3 predictions:

Spanish goalkeeper Manolo Reina kept a clean sheet and saved a penalty for Mallorca in a 1-0 victory. Expect a 79-rated card.

Azpilicueta was a menace on the right flank for Chelsea against Southampton, picking up one official assist and pinging a shot off the crossbar for fellow wingback Chilwell to net.

Another Chelsea player with TOTW 3 potential is centre back Chalobah, who netted the first goal in his team’s 3-1 win over Southampton. He should receive a 79-rated card.

Leeds centre back Diego Llorente put in a Man of the Match-worthy performance over the weekend against Watford, keeping a clean sheet and netting the winning goal. Expect an 81-rated card.

Juventus midfielder Locatelli netted a late winning goal against Torino at the weekend. Locatelli is also a Ones to Watch player in FIFA 22, so owners of that card will get a nice upgrade to 84.

Italian Bertolacci scored a brace from central midfield for Turkish side Fatih Karagümrük in a 3-1 victory. 80-rated card most likely on the way.

Pacey Serbian Kostic looks set for an in-form and a position change in TOTW 3. The left midfielder could bag himself an 86-rated CAM card for his role in Frankfurt’s comeback victory against Bayern Munich.

French midfielder Lemar scored and assisted in Atletico Madrid’s win against titans Barcelona at the weekend. Usually a left midfielder, Lemar was playing in central midfield and could earn himself an 85-rated CM or CAM card.

Having also assisted and scored in that Atletico win, Luis Suarez is probably in line for an in-from too. Expect an 89-rated card for Suarez.

Wolves striker Hwang Hee-chan is in with a great shout at featuring in TOTW 3 after netting two goals against Newcastle. With just a 75-rated base card, Hee-chan is also a strong candidate to be this week’s Featured TOTW player, which could see him bag an 83-rated card.

Speedy Canadian forward Jonathan David also bagged two goals at the weekend for Lille, and like Hee-chan could be a Featured TOTW player candidate.

There will be several more players on the bench, but these are our predictions for the starting 11 for TOTW 3 in FIFA 22. Keep your eyes peeled on Wednesday to see how many we got right.