We’re a month into FIFA 22’s release and despite the vastly different gameplay from the games before, I’ve found myself spending more time looking through the stats after a match. I’m a Football Manager addict at heart and these additional titbits of information add a certain level of depth to my game that I used to miss in the past when switching from Sports Interactive’s game to FIFA.

But this extra information isn’t just helpful in shaping my bang-average gameplay, it’s helpful in working out the emerging trends for the FIFA 22 meta – something that hasn’t been solidified in Ultimate Team just yet.

As well as a summary giving you the headlines of your performance, these new stats give you more information on possession, shooting, passing, and defending. While it might not seem like much to the average FIFA player, this level of insight leaves less room for guesswork when you’re trying – and failing – to qualify for the likes of the FUT Champions finals.

The headline new stat is expected goals, or xG, which is a complicated way of saying ‘that should’ve gone in’. It’s a predictor of the likelihood of each shot going in, based on many factors such as the play, the angle, and distance to the net. On a scale of zero to one, with zero being impossible to score and one being a 100% chance of a goal, xG gives a statistical look at whether you should’ve scored that chance.

In other words, next time you scream ‘how did he save that?’, check your xG – the data doesn’t lie.

But, as well as data that reaffirms how unlucky you might be, the feature is helping me shape my game. After each match, particularly in FUT Champs, I’m analysing my gameplay and asking myself questions like ‘how did I lose that last match?’, ‘how successful was my tackling?’ and ‘was I too focused on playing up one side?’.

By questioning my ambition, I’ve found myself coming out of losses with more answers than questions – and it’s helping me tilt less and learn more. 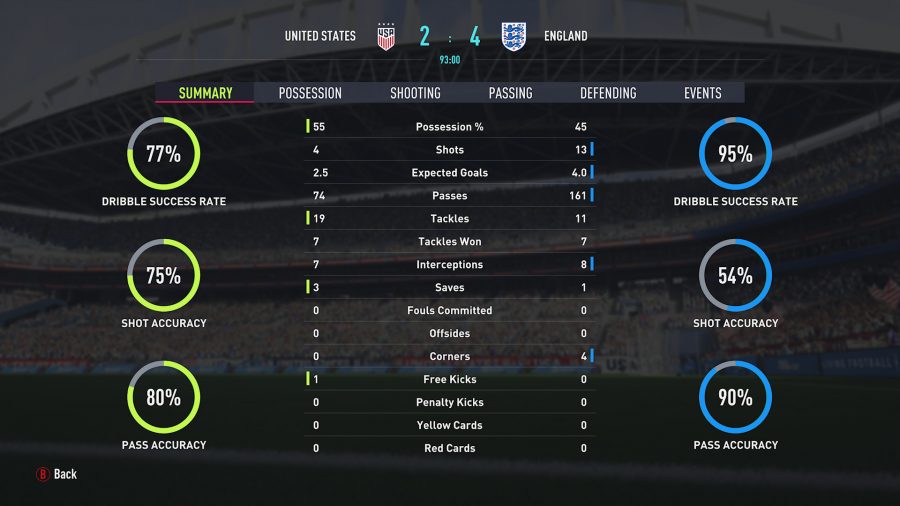 I might not have ePremier League ambitions, but I do want to improve. With EA binning relegation in Rivals, I’m able to take each match as it comes and learn from it. That in itself is a miracle – there’s no pressure to up the pace in game or sweat goals because you can learn from your mistakes and generate your own in-game tactics. By picking one or two stats each game, such as pass completion or possession, I’m able to hone in on what matters, hold onto the ball for longer, and generate meaningful goal-scoring opportunities. It’s also handy to finally have the shooting type breakdown to make grinding FUT objectives easier.

In Career Mode, half time stats show me which players are underperforming and dictate my substitutions. In Football Manager, players can use match stats to optimise their transfer windows in a Moneyball style operation. Sadly, long-term stat insights aren’t saved for AI clubs, so you can’t yet use it to decide who to sign (unlike FM).

You can use FIFA’s new stats in Pro Clubs too, to call out your teammates who are slacking. The improved heatmaps leave nowhere to hide when sticking to position and grafting on the pitch. Pass, tackle and shot success are also there in plain view. You better work, or you might find your friend drops you from their climb.

However, while FIFA 22’s new stats allow you to analyse your game deeper than ever before, it’s not perfect. A Weekend League tracker, something fans have been asking about for years, is still missing. Players who regularly qualify can’t track their performance over long periods of time, and instead are forced to use third-party websites to analyse the data. Average player ratings are also missing and I feel like attaching these to cards after each and every match would actually benefit players, since they can see whether their playstyle is limiting the potential of their stars.

We’re still a long way away from having a perfect stats mode in FIFA, but EA has made a good start. Sure, it’d be nice for in-game systems to tell us when a player taps in his 1,000 goal in Career Mode, but this is only the beginning. Hopefully in future updates, EA Sports will continue to innovate and satisfy the diehard football geek in me.