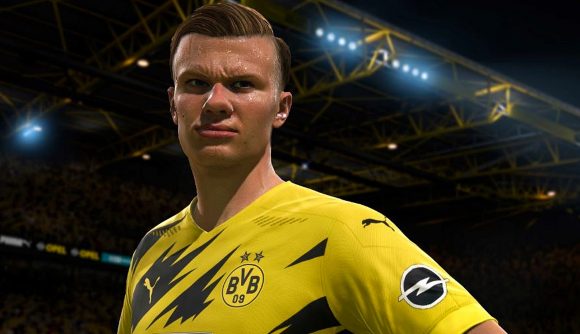 FIFA 22 is now well and truly here, with fans of the football sim series sinking their teeth into the latest annual release. While FIFA 22 appears to be just as, if not more popular than its predecessor, some intriguing stats have been revealed about its first week physical sales.

As reported by GamesIndustry.biz, the sales figures for boxed versions of FIFA 22 show a drop of 34% when compared to FIFA 21. This also comes off the back of FIFA 21 being the first game in the series to sell more digital copies than physical ones. While this certainly doesn’t mean FIFA 22 has flopped, as digital sales are likely still impressive, it does show a very interesting trend as we head into the next generation of consoles.

With the PS5 being available with or without a disc drive, and Microsoft opting to make its smaller Xbox Series S model digital-only, more gamers than ever are reliant on digital downloads.

This is reflected in the breakdown of platforms for the boxed sales of FIFA 22. Last-gen consoles were the most popular for those buying physical versions of the game, with the PS4 coming in at 41% of sales and the Xbox One at 27%.


This means that fewer players bought the physical version of FIFA 22 on Xbox Series X|S than they did on the Nintendo Switch (5%) – which features none of the gameplay innovations of FIFA 22 and is instead marketed as a ‘Legacy Edition’ using FIFA 21’s gameplay.

With new-gen consoles pivoting gamers towards a digital and disc-less experience, FIFA 22’s slump in physical sales is proof that it’s already having a profound impact. It certainly doesn’t mean FIFA 22 is any less popular than FIFA 21, but it does show a change that could spell danger for physical retailers.