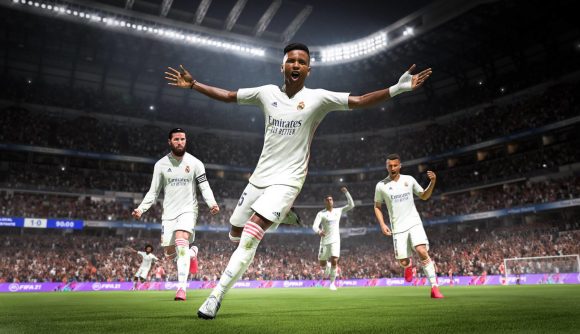 EA Sports has dished out seven-day suspensions to more than 30,000 FIFA 22 accounts in order to prevent them from competing in this weekend’s FUT Champions Finals. These accounts were discovered to be exploiting a no loss glitch in order to qualify for FUT Champions, and after eventually patching the issue on October 16, EA Sports today dished out the punishments.

The glitch, which was first circulated via a viral TikTok, involved players switching to the main dashboard on PS5 after conceding a goal, sitting there for around 30 seconds in order for the game to kick you for inactivity, and then switching back to FIFA 22 to find the match has not counted towards your FUT Champions qualification.

Despite the use of in-game exploits being against EA’s Positive Play Charter, and the likelihood of receiving bans high, it seemingly didn’t stop thousands of players from trying it. The 30,000 bans issued by EA Sports today will completely bar players from logging into FIFA’s servers, so it’s not just FUT Champions Finals that they’ll be missing out on, it’s all of Ultimate Team plus other online modes like Pro Clubs. Time to start a new Career Mode save for the weekend, you scallywags.

While a seven-day suspension isn’t too harsh and was the expected punishment for those abusing the no-loss glitch, FIFA 22’s in-game notices have certainly caused some panic among those punished. Rather than displaying the intended seven days, some players are receiving notices that they are suspended for 1,000 days, which would see them banned until July 2024.

We have identified over 30K active accounts that exploited this issue consistently and have suspended them from FIFA 22 online for 7 days, preventing them from participating in this week’s FUT Champions Finals.

Some players have reported on social media that while it says 1,000 days in-game, email confirmation of their bans have read seven days. EA is yet to acknowledge this and if the 1,000 days displayed is merely a visual bug.

While some feel bans for using an in-game bug are unjustified, it quite clearly goes against the Positive Play Charter, and a lot of players are praising EA Sports for taking action.