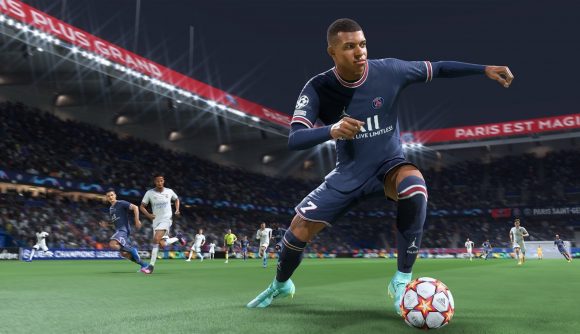 After almost thirty years of carrying the name of football’s governing body, EA Sports says it is “exploring the idea” of renaming the FIFA series of games.

In a press release celebrating a successful and “record-breaking” launch of FIFA 22, EA Sports’ group GM, Cam Weber, also looks ahead to the future of the series. While Weber talks extensively about FIFA’s unrivalled authenticity with all of its partnerships and licenses with football leagues and clubs, he also drops a bombshell in the penultimate paragraph.

“As we look ahead, we’re also exploring the idea of renaming our global EA SPORTS football games,” the post reads. “This means we’re reviewing our naming rights agreement with FIFA, which is separate from all our other official partnerships and licenses across the football world.” While the player likenesses, official club names and badges, broadcast packages, and more wouldn’t be affected by cutting ties with FIFA, the storied name of the series definitely would be.

While Weber doesn’t give a timescale for when a potential rebrand may occur, there’s a good chance that FIFA 22 may be the last ‘FIFA’ game we get to play.

The revelation has caused fans of the series to speculate as to what FIFA could be rebranded to. Some have joked that it may look to one-up Konami’s rival football sim, eFootball, by calling itself ‘eAFootball’.

The PR also states the following:

“We’re also exploring the idea of renaming our global EA SPORTS football games. This means we’re reviewing our naming rights agreement with FIFA, which is separate from all our other official partnerships and licenses across the football world.”

If a rebrand goes ahead, FIFA could become the first game in EA Sports’ lineup to not feature the name of a competition, institution, or regulatory body, unless it decides to partner with a new one – for example, FIFPro, the representative organisation for professional footballers.

A name change could also be a big deal for the FIFA esports scene, which has some of its biggest competitions backed by FIFA, including the prestigious eWorld Cup Final which crowns a world champion each year. By cutting ties, it would likely lose both the naming rights and the support of FIFA for these events.