Watford has already tasted victory in the ePremier League once before. In 2020, Tom Leese was triumphant while representing the Hornets, and with this year’s tournament featuring a reworked format that will crown a winning team rather than an individual, the club will be keen to claim this year’s title as well.

Representing Watford this year is Hashtag United duo Alex ‘Shawrey’ Shaw and Tom Stokes, and The Loadout spoke to the latter ahead of the FIFA 22 ePremier League Finals this weekend.

Stokes, who is playing in his third ePremier League, was really on the rise before the pandemic wiped out live events in the FIFA esports scene. This weekend’s ePL Finals will be the first live event for UK FIFA pros in over two years, and for experienced players like Stokes, it signals a return to the life they knew before COVID-19.

Here we chat about his return to LAN, the importance of the ePremier League for UK players, and his expectations for the season ahead.

The Loadout: Why do UK FIFA players get behind the ePremier League so much?

Stokes: I think the whole dynamic of everyone representing a specific club means you get some new fans willing you on and supporting you. It’s quite a big deal as well as it’s broadcast on Sky and that’s not really the norm [for esports events], and it just seems to have a big vibe to it every year that everyone wants to get in on.

How’s it been working with Shawrey at both Hashtag United and now with Watford too?

Yeah it’s been really good. We have had the unique experience of going into an office environment at Hashtag, and working together and playing together so it’s been a really different year for me and a big learning experience. Before this I would just play at home, but this has been really good. We’ve got quite a good partnership going and I think we’re going to do well representing Watford.

It’s been great [working with the club]. The reason we both wanted to compete for this club is because Shawrey’s family have really close connections with Watford, and I also went to college in Watford so it feels very much like a local team to me. The club has also been really interested in the ePremier League, and has been coming to film [me and Shawrey] and get some collaborations going, so I’m really pleased and proud to represent Watford in the ePremier League this year. 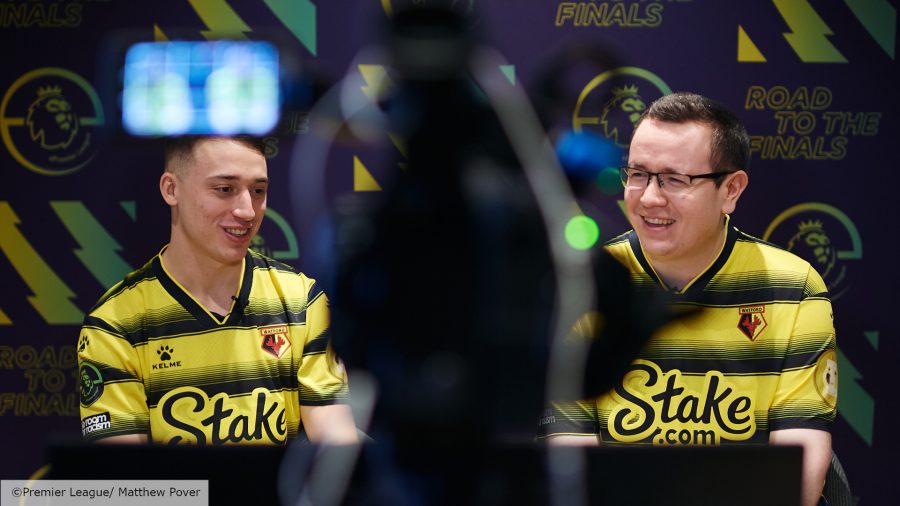 You started really making a name for yourself at LAN events just before the pandemic. What’s it like to have these live events back now?

I’ve missed it a lot. During the FIFA 19 season there were a whole bunch of events, and I was almost going away once every month to compete. It was a big part of what makes competing so enjoyable. Obviously, when [LANs] went away it got a lot harder to stay motivated and keep up. Looking at things now, it seems we’re gonna start competing in person more and more, so I’m looking forward to that.

How did you stay motivated in that online era?

To be honest with you, I did lose a lot [of motivation] last year. I think in combination with not being successful [results-wise] and not having much to work towards it was hard, and I think I let things slip quite a bit in terms of how much I practised, how much I put into it. But this year, I’ve been going big, streaming a lot, and just trying to take advantage of anything I can.

You’ve been generally doing well in the rankings this year, FIFA 22 seems to be a good fit for you. Would you agree?

Yeah, definitely. I was more confident a month or two ago, and then a new patch was introduced. I’m starting to get to grips with it again now and I’m starting to see good results again.

What would you say is your minimum goal for the whole season? What do you want to achieve?

First, I definitely want a good showing in the ePremier League. I want to take Watford to the semi-finals or grand finals at least. But other than that, I just want to make as many events as possible. There’s the eChampions League which I’ve managed to qualify for already, and obviously every player’s goal for a season is to make the eWorld Cup at the end, that’s the pinnacle. Also this year the ePremier League leads into the eWorld Cup, with the top performers earning spots at the playoffs, so yeah this is a really important tournament in the context of my whole year.

The FIFA 22 ePremier League Finals will take place this weekend, March 26-27. You can watch the action live on any of the Premier League’s social or content channels, on the EA Sports FIFA Twitch channel, or on Sky Sports and Sky Sports’ YouTube channel.