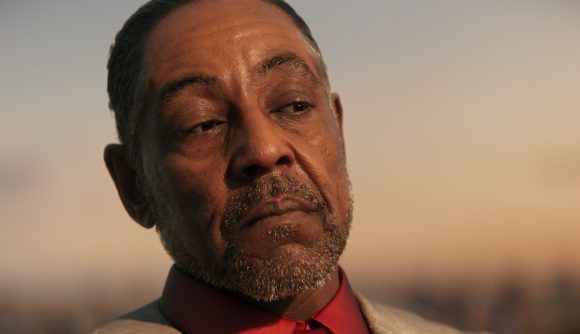 One of the most highly-anticipated aspects of any Far Cry game is the villain. While the man behind Far Cry 6’s main antagonist, actor Giancarlo Esposito, doesn’t want you to call Yara's dictator Antón Castillo the v-word, his performance and involvement with the game is already one of the main talking points.

Esposito has made it clear thus far that he is really invested in Castillo’s complex character and was keen to bring his acting into the videogame medium – so keen in fact, he apparently showed up to his first meeting with Ubisoft extremely prepared. According to Navid Khavari, the narrative director for Far Cry 6, Esposito had done a lot of groundwork in the build up to their meeting to discuss the role and the game.

“It was a bit surreal to sit down in front of him in our first meeting in New York,” Khavari tells The Loadout. “That meeting lasted for something like four hours. It was the most prep I’d honestly experienced with an actor in a first meeting. He’d done extensive notes and even had some props.”

Esposito’s early enthusiasm was clear, and the discussions about what both he and Ubisoft wanted out of Castillo’s character were very detailed right from the start.

“We talked about every facet of the character, and he really dialled into what might make a dictator justify their worldview, and in particular, how we should explore the dynamic of father and son,” Khavari says. “He pushed for real empathy with Antón. Then we started going over scripts and he began to play.

“There was charm, charisma, and also a moment where he stared at me dead in the eyes as Antón and he might as well have burned a hole into my skull. It was Far Cry.”

While casting the Breaking Bad and The Mandalorian star was a headline-grabber in itself, the amount of effort Esposito has clearly put into portraying Antón Castillo will be an exciting prospect for Far Cry fans.

Stay tuned for more insight from the Far Cry 6 team this week on The Loadout.