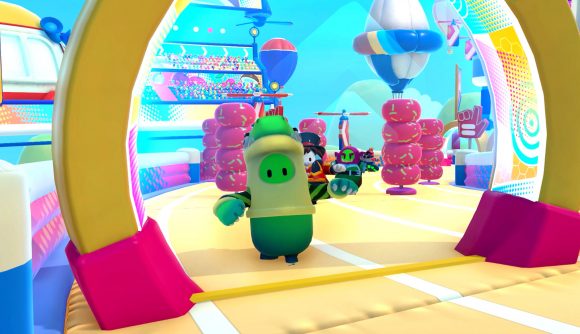 After what seems like a lifetime of waiting, Fall Guys is one step closer to making its debut on the Nintendo Switch and Xbox consoles and long-awaited jump to being free-to-play. The game, which launched into PS Plus, will be available to download from June 21, alongside a next-gen version for PS5 owners, and fully supporting cross-play and cross-progression.

But that’s not all either; the head beans over at Mediatonic have decided to make Fall Guys free-to-play after six seasons. That means, as of next month, players won’t have to fork out $19.99 / £15.99 to play the game. It’s unclear whether this impressive update will swell the player base to the game’s heyday, but with more platforms and a brand new season, which the developer promises will be its most “eventful” yet – the team is clearly gunning for the crown.

As a thank you to existing players for supporting Fall Guys, Mediatonic is rewarding them with the Legacy Pack. This comes packed with cosmetic items like a veggietdog outfit, feisty dwarf outfit and the first Season Pass of Fall Guys so players won’t feel hard done by in the changing of costs.

And, like other recently turned free-to-play games, Fall Guys will kick off with Season 1, again, except this time it’ll have heaps of new challenges and rewards in giant arenas, major updates to the game’s progression systems, and a new in-game currency called Show-Bucks. All of this is explained in the Fall Guys livestream, which you can watch below.

It’s also worth noting that Fall Guys will no longer be available to purchase on Steam as of June 21, any new players will have to download from Epic Game Stores if they wish to play. Steam players who already own the game will be able to continue playing like normal. Despite this shake up, it is still an exciting time for Fall Guys, especially now since it gives players the freedom to charge forward as beans once more ahead of the Fall Guys Xbox release date, switch release date or on any platform of their choice.