Fall Guys: Ultimate Knockout has been 2020’s breakout hit, with the wacky indie game becoming an internet darling as everyone races to get in on the fun. However, there can only be one winner, and with these Fall Guys tips and tricks, that winner can be you.

Since releasing on August 4, the game has topped the Twitch charts ahead of Just Chatting, sold 2 million on Steam, had a Twitch Rivals event announced, and even managed to get Sergio Aguero to recreate his iconic title winning goal in the game.

Now that Fall Guys Season 2 is here, there are 29 different events, though you’ll only have to play something like three to five in any given game. The games you’ll play are completely random, although not all will be the finale, and while some of the new levels look the same, they have completely different objectives.

So if you’re curious about what’s changed in Season 2 or you’re looking to win more fame and crowns, you’ve come to the right place. Here are our best Fall Guys tips based on each and every level.

In Block Party, you’ll be placed on a small ledge where you have to avoid oncoming blocks. Being near the edge is good to help you see what’s coming, but be careful that you’re not thrown off the side by another bean.

Let’s hope you don’t get travel sick, because in Dizzy Heights you’ll be spinning from platform to platform. Try to time your jumps right to get a nice little speed boost, but don’t worry if you mess it up and end up on the bottom half of the map. Here you just need to jump through the gap in the wall and walk up the ramp.

Once you’re at the end of the main section, remember to jump – there’s a gap in between the two platforms and it can often mean the difference between being knocked out and qualifying. 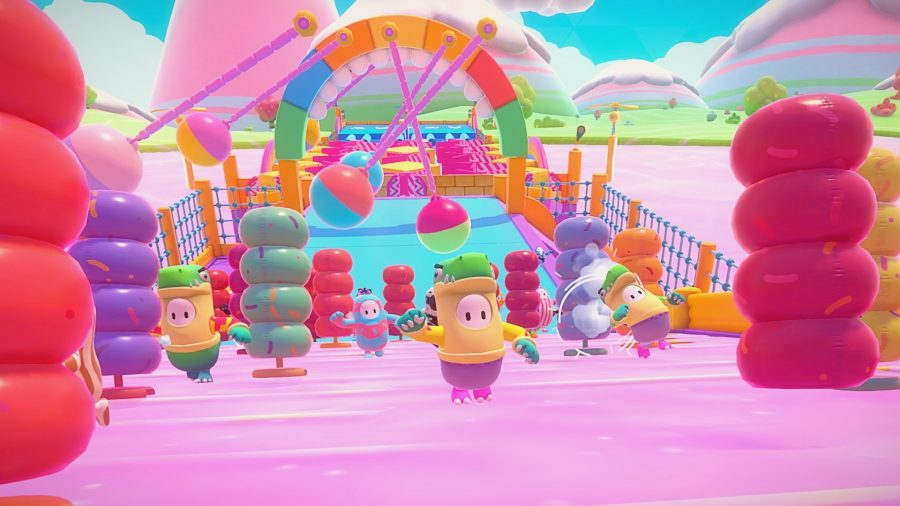 If you were one of those kids who dreamed about being on Taskeshi’s Castle then this is the level for you. While you can be the brave bean charging the way forward, sometimes the best method is to sit on the shoulder of the leader, diving through the holes they leave behind.

In this team game, you’re split into three teams where the goal is to gather as many eggs as possible. Gold eggs are worth more in this mode, so once you’ve gathered a few, make sure you stand near your goal to scramble enemy attempts to grab them and run.

Like Egg Scramble, you’ll need to grab as many eggs for your team while defending the draw bridges from mischievous beans. Ideally, you’re going to want an organised team here – with beans committing to either attack or defense. 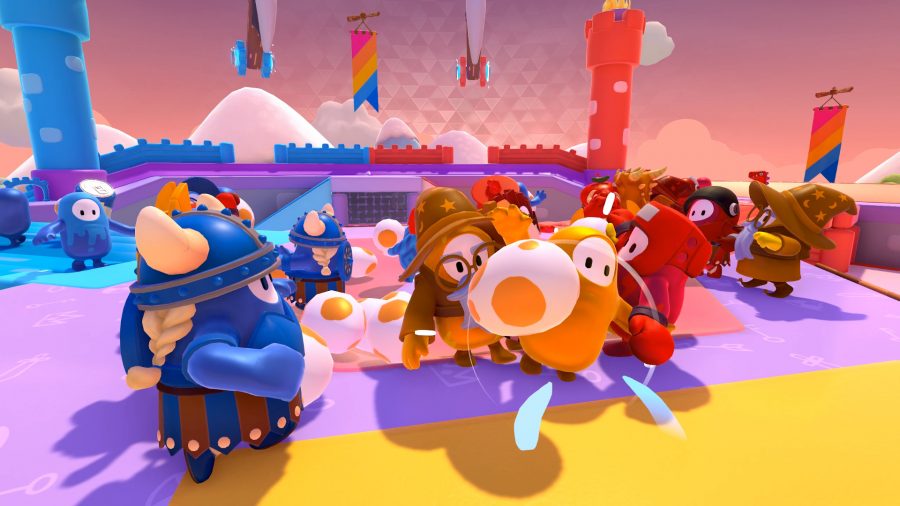 Feeling the FIFA fever? So is Mediatonic. In this game, two teams will go head to head to score as many goals as possible during the allotted time slot. You’ll want to have a few people in goal, since the rugby balls can land at pretty interesting angles if they’re hit well.

Fall Mountain is the most common finale level in the game, and it’s also the only level which never appears unless it’s the finale. Winning this one can be tough, but you’re going to want to keep an eye on the balls, avoid the hammers, and grab the crown. Yeah, you heard us: grab the crown.  We’ve seen too many beans lose a game that should’ve been theirs because they’ve forgotten to actually grab it.

No amount of Fruit Ninja training will help you here – you’re just going to need to avoid the fruit to survive. We tend to find sticking to the side of the course works the best since it reduces the chances of you getting clocked by a watermelon.

Timing is everything in Gate Crash. You’re going to want to head towards a closed gate, so that it’s open by the time you arrive. Do this several times and your run to the finish line should be pretty easy – providing you remember to jump for the final slime gate, of course. 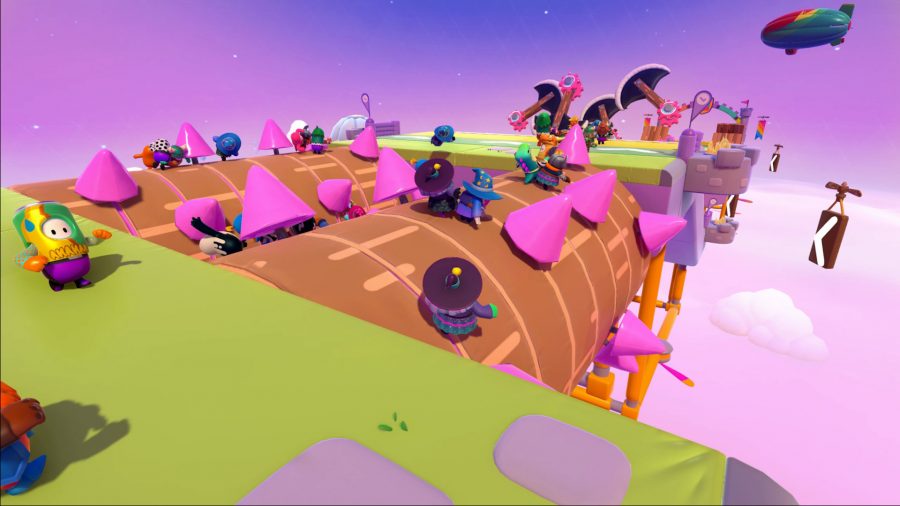 Another finale that requires a lot of patience. There are a few tactics to use here, but the favourite one, particularly among the biggest streamers is the one where you jump from hexagon to hexagon over time, planning your next move in advance.

Of course, there’s always the chance you’ll have that one bean who insists on ruining your pattern, so you might want to catch him out by destroying their patch altogether.

Oh, and if you like like you’re going to fall into the abyss, remember you can still jump and dive.

Again, timing is key to winning this one. You’ll need to rush onto the merry-go-round with the others, sneak into the gaps the platform makes, and go through the central gate. Once you’re there, do your best to avoid the swinging balls, slowing down if you need to.

This is another level where you’ll be expected to work as a team, so be prepared to either attack or defend. If you’re attacking – focus on one team and disrupt their defence as much as possible. If you’re defending, make use of jump and dive to keep the balls on your side.

In this team game, you’ll need to jump through hoops as they appear on the map. The first bean through the hoop wins a point for their team, but be careful not to bunch up and keep an eye on the ramps for the more difficult hoops.

This is basically like Hoopsie Daisie, except it’s a solo game instead fo a team game. Here the first to six points are the winners, so you’ll need to be quick on your feet and be fast to spot rare gold rings. Land one of those and you’ll be rewarded with five points.

We’re going to say it – Jinxed is the worst mode in Fall Guys and bloody difficult to win. It’s a bit like chain tag at school and requires you to run away from cursed beans. There’s no real solid tactic to this – just practice social distancing here and stay the hell away from others. 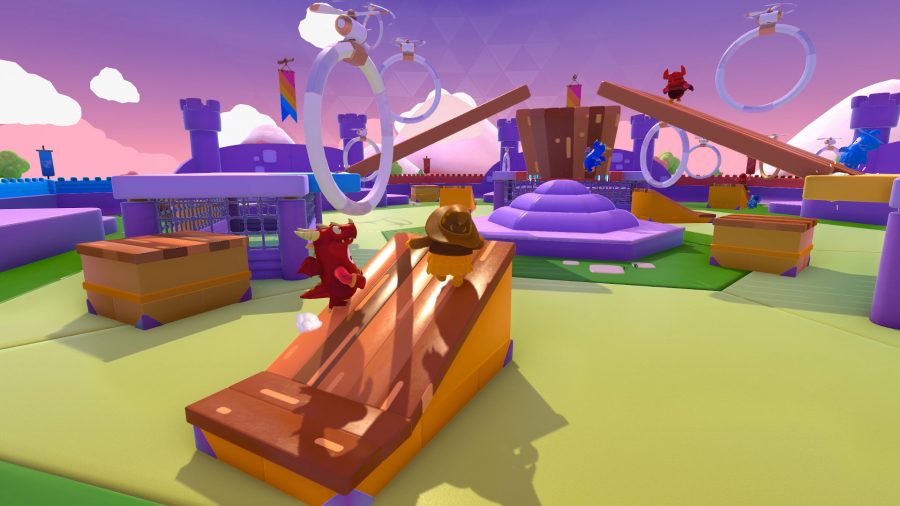 Jelly beans must have knees because in this level, they’re expected to jump to the moon and back. To survive Jump Club, make sure you time your jumps right and watch the pink buffer at the top – if you hit it, you could well bounce off the obstacle and off the map.

A more serious version of Jump Club with a twist. Here the finallists will need to jump over the gold bar and avoid the falling platforms. Generally the rule is to stick with the biggest platform, but if you do feel yourself becoming isolated, you can dive to another one – but it’s a risky play, especially since the beams get faster as time goes on.

This mode has three rounds where two, four, and six fruits are shown on floor panels respectively. You’ll need to memorise the panels and jump to the square that matches the one of the big TV. If you’ve zoned out, following others is your best bet – just don’t get baited.

In this team game, you’re going to want to push your ball through and obstacle course and down a ramp to cross the finish line. While it may be tempting to rush to the end and stall the other teams, you should work as a unit to get the ball through the course, before disrupting the progress of others. 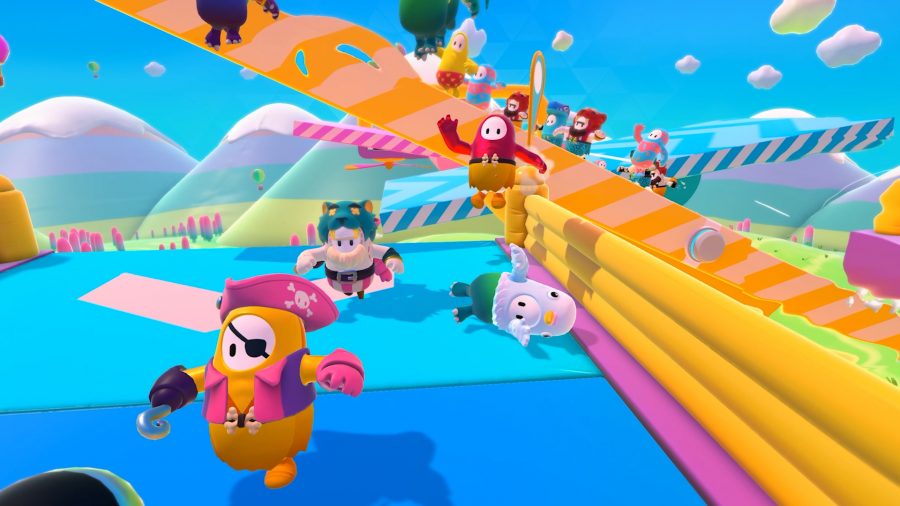 On this map, you’ll need to stay in the center and avoid the holes by jumping from roller to roller. Other players are likely to push and pull you here, so stay your ground and jump towards walls if you’re worried someone’s getting a bit too close for comfort.

This is basically Tail Tag built for the final showdown. Here only one person in the final round will be given a tail and the others must try to steal it from them to be crowned as the winner. The best way of doing this is by predicting the path of the carrier instead of mindlessly following the crowd in the chase.

Simple physics apply in See Saw, although the majority of beans seem to forget this. You’ll want to aim towards the middle of the platform to keep it level, but if you’re forced to jump for one that’s at an angle – make sure it’s not too steep and that you dive when you go for it. This should stop you from rolling off all the time.

This is one of the most difficult levels in Fall Guys, but it’s also a bunch of fun too. There are a few shortcuts you can take in Slime Climb, so follow the crowd and avoid the slime. Take your time on the rollers – since it’s easy to fall off and be careful of the top section. Lots of beans like to lurk here to try and thin the herd.

Lots of beans will be given tails in this mode making things a bit chaotic. If you start off with a tail, try and make your path unpredictable and use the spinning platforms to get a boost to avoid enemies. If you spawn without a tail, lurk under platforms and intercept beans to grab their tail. 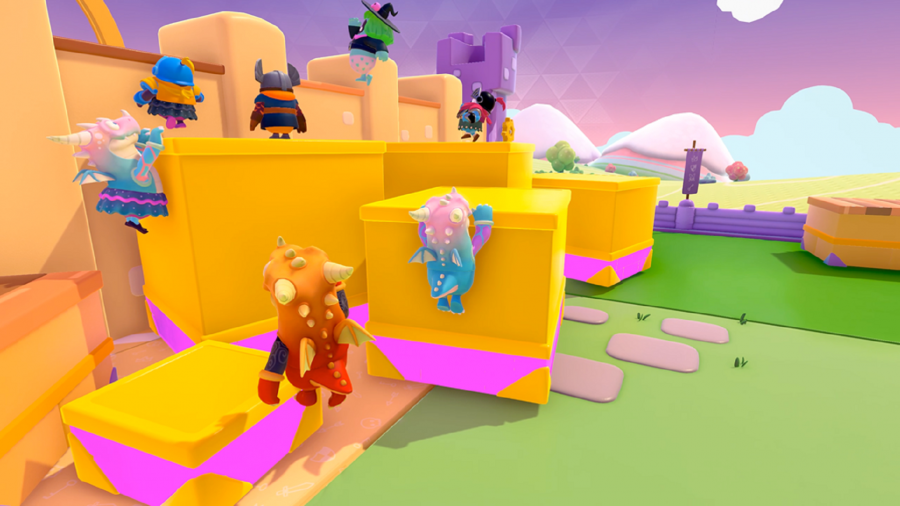 This is similar to Tail Tag, but you’re split in teams in this one. The same rules apply as above, but work as a team to corner enemies to steal their tails.

This level needs a brave bean to test out platforms and find the true path to the finish line. But that bean doesn’t have to be you. To be successful at Tip Toe, you’ll want to sit just behind the leader, memorizing the path as you go. Just be careful you don’t get shoved into the holes on the way there or shoved into the leading position. People will use you as a guinea pig if they have to.

Remember the parkour scene from The Office? Wall Guys is basically that. For this level, you’re going to want to shove objects in the general direction of the wall you’re trying to vault, jump off them, and then grab the ledge. Make sure you get your timing right or your little jelly bean will bounce right off the wall.

This is one of the most common levels in Fall Guys, so you’ll become accustomed to it in no time. You can use the spinning beams to catapult you further up the map at first, but when the level splits out into three channels, you’ll want to play it safe. Go down the left or the right channel, jumping and diving your way to new platforms as you go. On the last section, you’ll want to time your dive so you can get through the fan without clipping the sides.

And that’s everything you need to know to conquer Fall Guys once and for all. Now go out there and be the best bean you can be.