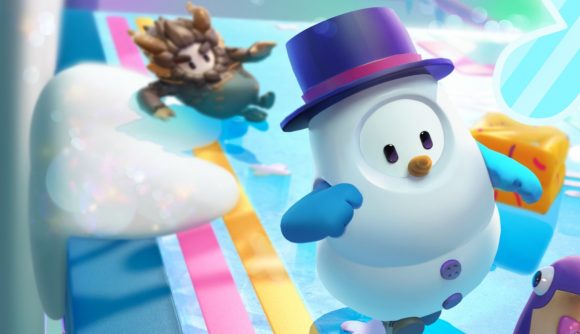 In the leadup to the reveal of Fall Guys Season 3, a piece of promotional artwork was split into 300 pieces and sent to 300 followers of the game’s separate Twitter and Discord communities.

It didn’t take long for the jigsaw to be completed, mostly thanks to some smart teamwork on the Discord side of things, and now we have our first proper teaser for Fall Guys Season 3, otherwise known as Winter Knockout. The new season is expected to drop early next month.

The latest artwork shows off some of the winter-themed skins that you’ll soon be able to earn, including a narwhal and snowman outfit, as well as a mysterious little critter that could well be an equipable pet. It looks to be a wind-up penguin toy of some kind, but I grow less sure of myself the longer I gaze upon its strangeness.

Fall Guys Season 2 landed in October and introduced four new games to the hugely popular jellybean battle royale. Season 3 is already shaping up to be even bigger than its medieval-themed predecessor, though precise details regarding new levels are still thin.

HUGE SHOUT OUT to everyone for working together and completing this puzzle!

I'm pleased to announce the theme of #FallGuysSeason3 is…

If you’re a PC player and are yet to give it a shot, it’s currently going for 20% off over on Steam. Oh, and you’ll be needing some expert Fall Guys tips if you’re to secure your first crown.