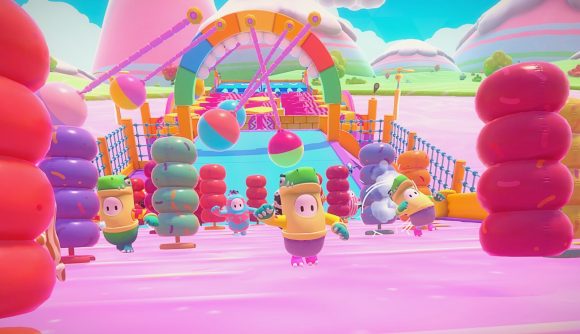 2020 didn’t know what had hit it when Fall Guys-mania descended in August. A moment of hope in an otherwise bleak year, players rallied around the PvP platformer and hordes of beans fought it out for crowns.

While the mania has died down a little, Fall Guys still has a dedicated playerbase and subsequent updates, seasons, and DOOM crossovers have kept things interesting. But sometimes you can’t beat the classics.

Door Dash was one of the OG Fall Guys levels that helped put Mediatonic’s alternative battle royale on the map. The premise is simple – it’s a race between 60 beans. Between the start line and a coveted place in the next round, however, are doorways that span across the track. Some open, some don’t. But one Fall Guys fan has recreated the iconic track in Minecraft – and it’s pretty impressive.

Creating some sets of doors that open and others that don’t is pretty difficult in Door Dash’s block-based counterpart. Reddit user ‘JJ2000nine’ laid a series of hidden switches under doors on his track, to mimic the random doors in Fall Guys.

Made this map in Minecraft from FallGuys

As with the original, attempting to smash your way through a door that doesn’t open will set you back valuable seconds, so leading the pack is always risky. But following behind can mean you get stuck in the ensuing bottleneck. So far, JJ2000nine is the only player in his version of Door Dash, but it’s an impressive recreation nonetheless.

It would be great to see more iconic Fall Guys levels in Minecraft – and even better if we could watch them on multiplayer servers. A Minecraft-ified Slime Climb with lava for slime would add an extra layer of danger, or a giant homage to Fall Mountain could reward Minecraft players with an Ender Pearl or Nether Star instead of a Crown.

Whatever happens next, we hope this isn’t the end of the Fall Guys x Minecraft crossover.