Evil Dead The Game, as you might imagine, is a title packed with evil and a lot of dead. Most of the time, it’s the evil that is dead – however, that’s not always the case. On occasion, it’s the heroes that fall in battle against the Army of Darkness and ultimately wind up dead. Thankfully, there are ways to bring them back into the fight. So, here’s everything you need to know about how to revive in Evil Dead The Game

Dying in any video game is a pain, and Evil Dead The Game isn’t any different. If you’re not managing your supply of Shemp’s Cola – or whether your Amulet shield bar is topped up – then you’re going to wind up paying the price with your life – which leaves your team at a disadvantage. So, that’s why knowing how to revive in Evil Dead The Game is so important. You really do need all four of you to defeat the Dark Ones and take on whatever the Kandarian Demon throws at you.

You’ll be pleased to know that it isn’t actually too hard to do, though – you just need to make sure you’re working as a team. We know that’s easier said than done, but keep reading for everything you need to know about how you can get your deceased teammates back on their feet in the fight against evil.

How to revive in Evil Dead The Game

If you’re looking for a guide on how to get someone back on their feet when they die – in the Evil Dead game – you’re in the right place. So, without further ado, here’s how to revive a dead Survivor in Evil Dead The Game:

When a downed Survivor dies, players will be able to recover the soul of that Survivor from their body – as well as a little bit of loot, things like ammunition and Shemp’s Cola. Once you’ve picked this up, you’ll need to head to an Altar.

These are marked on the map with a strange spiral-like smoke symbol – and, the closest one to you will also be marked as an objective (like the lost pages of the Necronomicon and the Kandarian Dagger) if you’re carrying a Survivor’s soul. So, you shouldn’t have any trouble finding one. Here’s an image of one, just so you know what you’re looking for in-game. 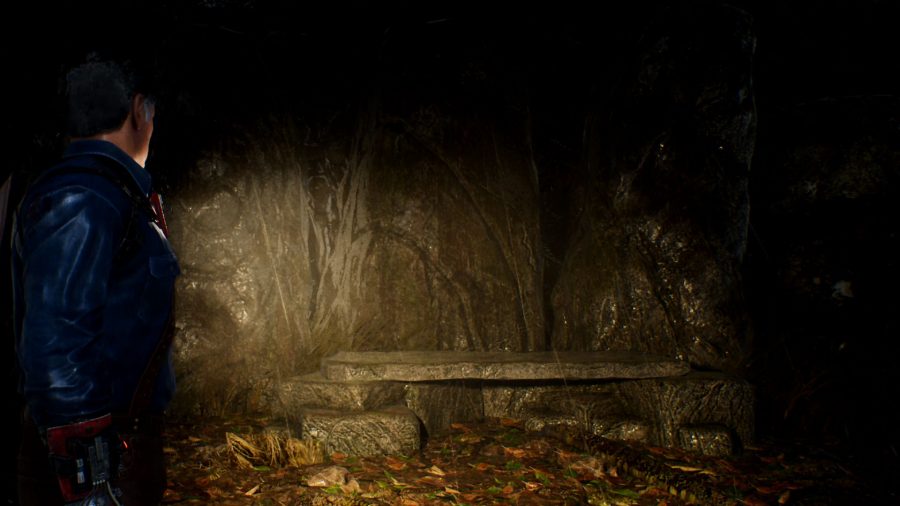 These Altars can be off the beaten track and it’s important to know how to reduce your Fear level in Evil Dead The Game if you go after one alone – the Kandarian Demon might be able to catch you out and take you down too, if you don’t work with your team on this.

Once you’re at an Altar with a dead Survivor’s soul, all you need to do is perform the resurrection ritual – essentially, hold the interact button on the Altar. This option is only available if you have a soul to resurrect and it does take some time. So, you need to make sure the area is clear before trying this – any attacks will interrupt the process and force you to start again.

It’s also worth noting that this is only possible while an Altar is available. If you’re defending the Necronomicon in the end game, you might not be able to recover a Survivor’s soul at all when they die – this will be because there’s no Altar available inside the playing area. This final fight can be a lot tougher than it needs to be if someone goes down early on.