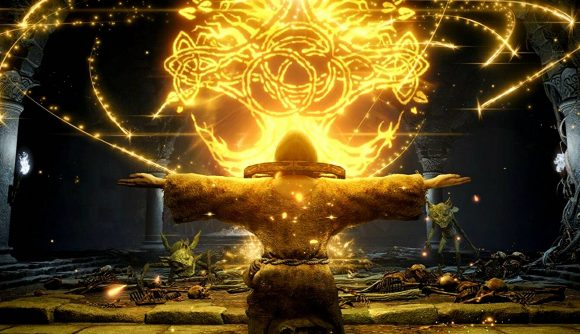 Talented video game showcase host and famous friend of Hideo Kojima, Geoff Keighley, has recently taken to Twitter Spaces to conduct a Q&A session all about the upcoming Summer Game Fest – which is scheduled to start on June 9. Of course, he didn’t reveal anything that would spoil the show. However, fans did learn just how important the Elden Ring reveal was to last year’s spectacular showcase.

“Last year was massive with Elden Ring”, Keighley begins in response to a question from ‘Blaze’. “That was cool because it was an announced game and we just shared the first gameplay of it… that was a really big moment.” But, just how big was this moment? Well, as it turns out, it was the big moment that became a central pillar of last year’s Summer Game Fest showcase.

Elaborating on how important Elden Ring was, in response to a question from ‘CyberpunkAfroSamurai’, Keighley explained that “FromSoftware had called [him] just a couple of days after the Game Awards in 2020 and said ‘hey, we want to work with you and do something for Elden Ring.’

Keighley goes on to explain that when he shared his plans with FromSoftware regarding the bigger 2021 Summer Game Fest showcase, when compared to 2020’s “broadcast from home”, they were thrilled and that Elden Ring “really became an anchor that helped [him] build the show”.

“I couldn’t believe they wanted to bet on us when they could have been at any press conference they wanted to – whether that was Xbox or PlayStation, [or] their own event”, says Keighley. “They believed in my vision for a cross-industry event.”

It’s going to be difficult to discern just how much viewership was drawn to last year’s Summer Game Fest due purely to Elden Ring’s appearance, but it’s clear that Keighley values the trust from FromSoftware and the announcement itself highly. But, what does all this mean for this year’s Summer Game Fest showcase? Well, Keighley shared an insight into that, too.

“I think it’s going to be a different show… there was obviously some initial trepidation because last year was so big with Elden Ring… how do you top that?” Keighley asked himself, in response to a question from ‘thespherehunter’. “The answer is you don’t, you just come up with a different show with different things.”

Following this, Keighley reiterated that he’s “honoured to be able to do what [he] does”, sharing developer’s work with the world and discussing upcoming projects with game-makers. As expected, he didn’t share anything about what these developers have been working on – or anything about any upcoming projects at all – but it sounds like fans should temper their expectations after last year’s Elden Ring reveal. There’s going to be games, but they just might not be quite as mind-blowing as that. However, we don’t know for sure.

If you’re still interested, then you can check out our up-to-date Summer Game Fest schedule 2022 right here. We’ll make sure we cover all the big reveals and updates from major studios right here on The Loadout – so, keep it bookmarked.