The Soldier of Godrick is one of the first first bosses you come across in Elden Ring and serves as a very easy foe for players to defeat, acting as a bit of a tutorial teaching you how to counterattack. While he has very little health, he can catch you off guard if you stop blocking or happen to dodge at the wrong time.

This boss is actually completely optional and can be missed if you don’t enter the Stranded Graveyard at the start of the game and head out into the Elden Ring region of Limgrave instead. To prove just how optional it is, you aren’t even given a reward or a piece of gear for beating the Solider of Godrick.

So, if you playing Elden Ring want to know how to beat the Soldier of Godrick, check out these tips and overview of his moveset, so you can slay him for good.

Elden Ring how to beat the Soldier of Godrick

As we mentioned, the Soldier of Godrick is a very easy boss due to his lack of poise and health. But, you should be able to beat him if you hold up your shield (if you have one) and block any attacks.

From there, you can can perform a Guard Counter, which will slice off about a third of the soldier’s health bar.

You can keep doing a Guard Counter or attack the soldier normally, as he will most likely stay stun-locked, allowing you to kill him in a single attack chain. 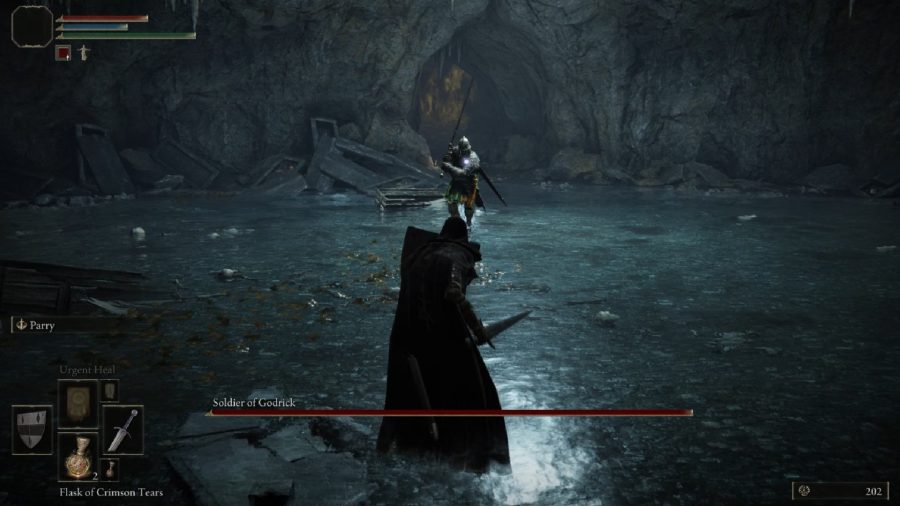 Once you have defeated Godrick, you can exit the cave, pick up the ‘Strength!’ gesture and head out into Limgrave proper.

So, there you have it. That is our guide for Elden Ring on how to beat the Soldier of Godrick.