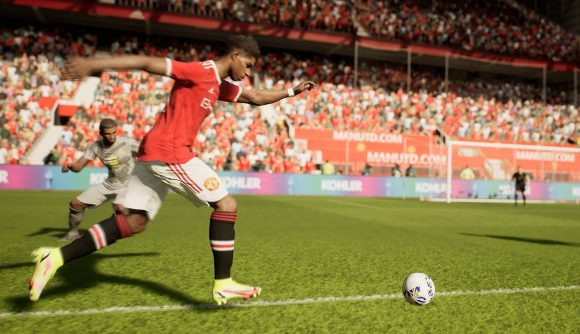 After a pretty horrific soft launch last year, which saw Konami delay its full launch by several months, eFootball finally released with its first season earlier this year to a pretty decent reception. However, in what is a slightly odd decision for a live service game, Konami has announced that there will be an almost one-month gap between Season 1 and Season 2, leaving players in a lengthy limbo.

In an announcement on Twitter, the developer says that eFootball Season 1 is wrapping up today, May 19, and the game is entering “pre-season” for Season 2. This means all competitions and events tied to Season 1 have now finished too. However, Season 2 will not be getting underway until June 16, which is exactly four weeks away.

During this lull, eFootball update 1.10 will roll out for console players, which will improve “win/loss decision making” and upgrade the game’s servers. While these are certainly positive improvements, Konami says the downtime for this update will be a whopping three days between May 30 and June 2. During this time, you can still access eFootball, but only “trial matches” featuring a handful of leagues and teams will be playable.

With most live service games switching relatively seamlessly between seasons, the four-week gap in content is a strange decision, and one that players haven’t received too well.

[About version 1.1.0 update for Console]

The events and campaigns for SEASON 1 have come to an end, and today marks the start of the pre-season period for SEASON 2. pic.twitter.com/H2iaIGSfKu

Konami does promise that when it does finally launch, eFootball Season 2 will have “various in-game events” for players to enjoy.

When the three-day downtime ends on June 2, the mobile version of the game will also finally be getting its rebrand to eFootball and will be fall in line with the versions on other platforms.

It’s clear that even with the game now out in a solid state, eFootball is still experiencing some wobbles behind the scenes. With FIFA continuing to dominate the space, and a new contender entering the football sim space this year in UFL, Konami will be hoping it can find its feet again.