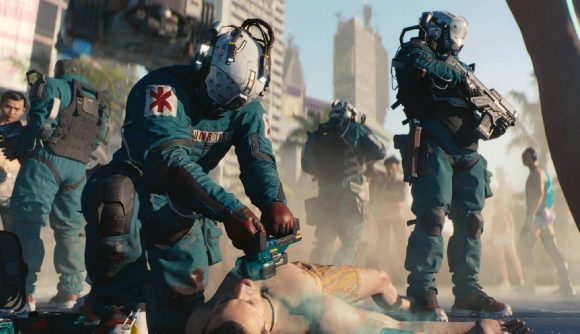 A new “major” Cyberpunk 2077 update is on the way according to CD Projekt Red, which revealed the information in its latest financial report. The new update is expected to continue enhancing the experience and fixing issues that players have been running into since the game launched almost a year ago. The update will be launched on all platforms.

Despite already being billed as launching alongside the new-gen version of Cyberpunk 2077 in the first quarter of 2022, the confirmation that this major update is coming to all platforms will go down well with those playing on last-gen consoles and PC. While the new-gen version will have its own bells and whistles, it appears all Cyberpunk 2077 players are benefitting from this next update.

This announcement came alongside the news that CD Projekt Red are also expanding their teams for all their projects and the PS5 and Xbox Series X|S versions of the game are still on track to meet that Q1 2022 release window.

CDPR reiterated that the new-gen version of The Witcher 3 is also on track for Q2 of 2022.

Finally, while details about the Cyberpunk 2077 update weren’t provided, CD Projekt Red revealed that the game’s expansions and DLC content is still in development.

Hopefully, we won’t have to wait too long to hear more about Cyberpunk 2077’s future updates.