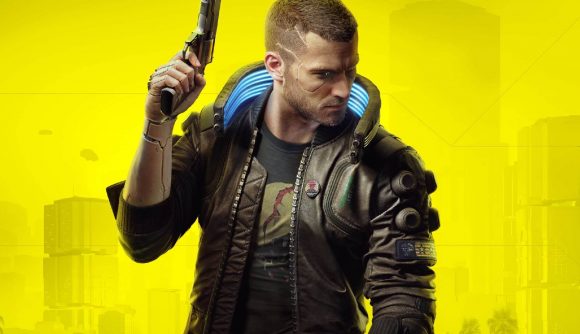 Cyberpunk 2077 was thought to be heading to Game Pass soon after eagle-eyed fans spotted a frame from the game in a new Microsoft trailer. The trailer, which was released yesterday to celebrate the launch of Cloud gaming support for Xbox consoles, included a small snippet from an old Cyberpunk 2077 gameplay trailer.

This snippet was spotted by a user on Reddit and features V shooting some robots in the outer areas of Night City. A commenter then spotted that this clip was from Cyberpunk’s official gameplay trailer from November last year.

So, while this new trailer didn’t outright confirm that the game is coming to Game Pass, it looked promising- especially since there are hundreds of other games from the Xbox Game Pass games list it could have picked. Plus, when you factor in Cyberpunk 2077’s first anniversary is just a few weeks away, it seemed like a perfect fit.

The Loadout has reached out to CD Projekt Red for comment, however the publisher told VGC that “there are no Game Pass plans for Cyberpunk 2077.” Despite the game not coming to Game Pass you can watch the trailer below, complete with the Cyberpunk 2077 frame at the 18 second mark.

And, if you want to jump into Game Pass ahead of the Game Pass December 2021 line-up announcement, which includes Halo Infinite, you can currently get your first month for just $1.