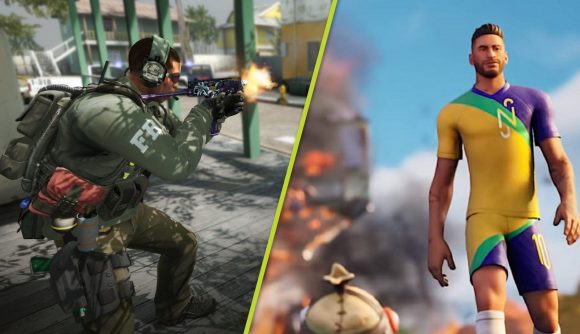 From Robin Williams to The Rock, it’s become common to find celebrities who play videogames, but it isn’t often that they will accomplish a major feat in their area of expertise, then go straight home and throw themselves into a competitive match of Counter-Strike: Global Offensive – but that’s just what football icon Neymar did.

A Reddit post by user ‘AbsoluteDealer’ brought our attention to Neymar’s journey from football field to first-person shooter, as an image taken from the star’s social media suggests Neymar went home after the recent football match between PSG and Clermont Foot and decided to play the FPS game as a way to unwind.

The image shows his gaming desk setup with CS:GO running, accompanied by the number “3” and a football emoji, a win emoji, then the letters “CS.” The only full word reads “bebado,” which according to Google Translate means “drunk” in Brazilian Portuguese. On his desk is a signed football, presumably from his recent match against Clermont where he scored a hat-trick, which would explain the emojis’ meaning.

Neymar has long been associated with CS:GO, even going so far as to stream himself playing the game on Twitch and even uses FACEIT for matchmaking. It’s not a gimmick, either, as Neymar clearly has the skill to play at high levels, being rank 3 on FACEIT and around Master Guardian 1 in normal ranked matchmaking.

While many gamers have to psyche themselves up to jump into the competitive CS:GO scene, getting their aim on-point in a practice warm up mode, Neymar seemingly doesn’t feel the pressure. It’s no wonder, because you have to have nerves of steel to score a hat trick and play for a club like PSG.