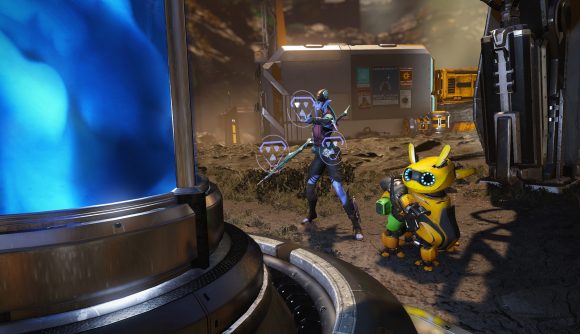 Crucible’s only been out for a few weeks, but Amazon Games’ new MOBA-inspired shooter is already undergoing some big changes. After gathering some feedback from players, Relentless Studios, the game’s developer, says it plans to scale back the amount of modes on offer to focus on Heart of the Hives.

In a new development update posted yesterday (June 4), the studio says it is going to be focusing on the mode, which pits two teams of four against one other in a race to secure three Hive hearts, as it’s the most popular among the community. It’ll also allow the team to prioritise much-requested features, like voice chat.

“While there’s been a great response to the premise of our game from many players, we’ve also heard the feedback that there are features that we need to add as a top priority, like voice chat,” Relentless Studios says in the developer update. “We agree, and we’re going to stay in pre-season until those features and polish are in Crucible. We’re also going to use our time in pre-season as a chance to go all-in on the parts of Crucible that are resonating most strongly with you, our community.

“The community has rallied around Heart of the Hives in an amazing way. Moving forward, we’ll be putting all of our efforts towards Heart of the Hives and what we can do to make that mode shine. Focusing on one mode allows us to refine the design of core systems without the compromises we needed to make to support three game modes.

“This does mean that we’ll be retiring Harvester Command and Alpha Hunters for the foreseeable future.”

Relentless says it plans to build on the Heart of the Hives game mode in two phases. The first will build on the core systems necessary to support a Heart of the Hives-centred vision for the game by developing features it needs like voice chat, a surrender option, a system to deal with AFK players, a new ping system, and a mini-map. Technical things like frame rate, hit registration, and matchmaking will also be looked at during this phase.

The second will be about improving the mode, but Relentless says it wants to gather feedback from players first. Improvements to the map, creatures, and support for custom games are all part of the plan though according to the game’s Trello board.

Given that Crucible now has a peak player count of about 800, Amazon Games and Relentless will be hoping the much-needed changes will bring some players back to the free-to-play game before it embarks on its first competitive season.