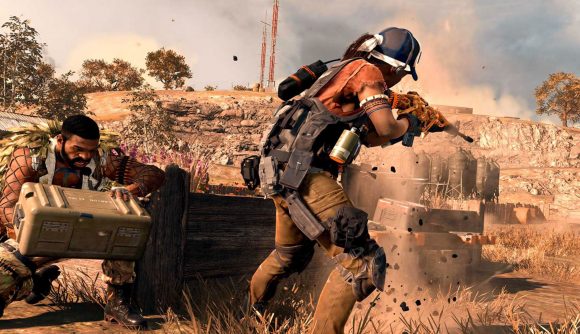 Plenty of Call of Duty: Warzone players, including some of the game’s top streamers, are experiencing something rather strange right now – they are jumping into lobbies and are being boosted to account level 1,000, unlocking heaps of guns, attachments, camos, and cosmetic items in the process.

It’s not confirmed what is causing this anomaly, but it is widely believed to be stemming from a new Warzone cheat, and hackers are somehow sharing the spoils of unlocking pretty much everything in the game with other players. While some have speculated that killing a hacker that is using the cheat is what is triggering the level increase and unlocks, it appears to either be targeted or randomly distributed to a handful of players in a hacker’s lobby. The exact science is unknown, but whatever is going on, it’s pretty wild.

Streamers such as ‘DiazBiffle’ and ‘Smixie’ have experienced this, but none more high-profile than Warzone’s biggest streamer, Nick ‘NICKMERCS’ Kolcheff. Sitting on zero kills in the early moments of a match, NICKMERCS suddenly gets bombarded with dozens of in-game notifications.

These include completing mastery challenges, ranking weapons up to their max rank, and unlocking camos – so… many… camos…

After persevering with the constant unlock notifications and finishing the match, he goes into his gunsmith menu to find that he has unlocked every camo for Black Ops Cold War weapons (including the prestigious Dark Matter), has every operator unlocked, has dozens of new calling cards, and is level 1,000.

The same did not happen to teammates Denis ‘Cloakzy’ Lapore and Tim ‘TimTheTatman’ Betar, suggesting that a hacker either targeted NICKMERCS specifically to get all of this stuff unlocked, or it was triggered for some random players in the lobby.

Either way, it’s a hack or glitch that Activision will want to swiftly patch up.

While NICKMERCS and TimTheTatman joke that, after all the negative interactions with hackers, this actually seems “fair” and that hackers are now on some kind of “Robin Hood” redemption mission, this shows just how vulnerable Warzone is to cheaters.

Hopefully, those that have innocently and unknowingly had their accounts maxed out by these hackers will avoid punishment in future ban waves.