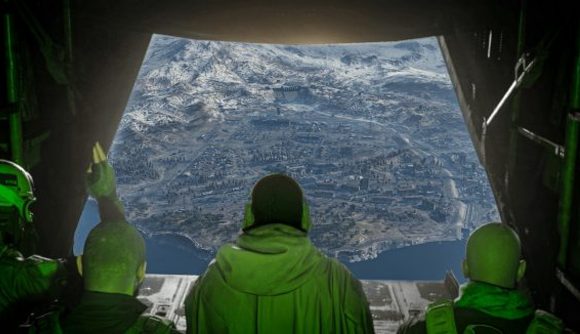 The sequel to Call of Duty: Warzone may be a long way from being released, but that’s not stopping information about Warzone 2 leaking fairly regularly. The most recent dump of insider information involves the Warzone 2 map, but there appears to be some discrepancies among sources, especially regarding details concerning DMZ – the rumoured Escape From Tarkov-style mode coming to Modern Warfare 2.

Earlier this week, leaker ‘GhostOfHope’ claimed that DMZ will have unique maps and that four of them were in development. These would also have dynamic weather and day and night cycles. However, a report today from Tom Henderson in exputer says that the new map for Warzone 2 will be shared with MW2’s DMZ mode. This claim has also been backed up by another leaker, ‘TheMW2Ghost’.

Henderson’s report also claims that the Warzone 2 map will have points of interest based on classic maps from the original Modern Warfare 2. These include Highrise, Terminal, Quarry, and Afghan.

Another intriguing bit of information concerns a new way to earn your loadout: Strongholds. These strongholds are AI-guarded points on the map that require you to complete an objective in order to get your hands on your favourite weapons. This was first reported by YouTuber ‘NerosCinema’ and corroborated by Henderson.

There will reportedly be “25-30” strongholds scattered around the Warzone 2 map.

While there will be a brand new map, NerosCinema also claims that Verdansk will be returning at some point in Warzone 2.

With some conflicting reports between various Call of Duty leakers when it comes to Warzone 2 and DMZ, the picture is far from clear. Reception to these reports is also mixed – while many are excited to learn that classic maps will potentially make cameos in the new Warzone 2 map, others are disappointed to hear that DMZ will be sharing the same space, rather than going it alone.