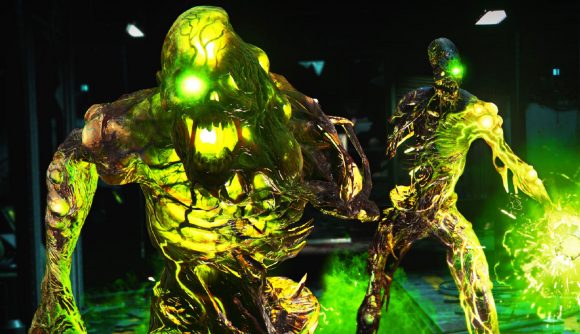 Treyarch has officially announced Call of Duty Black Ops: Cold War is getting a zombies mode called Die Maschine, arriving November 13. While many of us had heard the leaks, the Call of Duty team has released tonnes of extra information about the fan-favourite mode and what form it will take in Cold War – and it’s all soundtracked by a banging remix of Soft Cell’s 80s classic Tainted Love.

Seasoned zombies players will remember the explosive ending of Black Ops 4 (spoilers for a two-year-old game incoming) when our intrepid team sacrificed themselves to blow up the multiverse. The plan was to create one universe, in which zombies didn’t exist. As Craig Houston, lead writer at Treyarch confirms in the official announcement, “they were half right”.

So, we no longer have a multiverse, but we’ve kept the zombies – talk about a lose-lose scenario. Now, you are a part of the CIA-backed Requiem team led by Grigori Weaver, sent to investigate a long-abandoned bunker, which zombies fans may recognise, as the orginal Nacht der Untoten map from World at War.

However it looks like the Cold War is about to heat up, because as well as zombies, players will have to deal with the Soviet-led Omega Group who have arrived to study the changes. The new story will unfold through in-game intel as the teams fight it out amongst the undead, and new maps will be released as free updates.

The call-backs and references “celebrate our entire zombies heritage,” explains John Rafacz, Treyarch’s director of communications. However, the four-player cross-play co-op mode has been brought in line with present Call of Duty games.

The next generation of Zombies is here. New story, New characters, New ways to play.

Classic buffs such as Speed Cola and the Pack-a-Punch machine are back, but weapons now have rarities. The rarer a weapon, the more damage it’ll do. The aim is that the new rarities will make Wall Buys and Mystery Boxes more exciting.

However, player progression will be connected across all game modes, meaning that you can use your loadouts and unlocked weapons in zombies. Gone is the thrill of starting a match with only a pistol against a horde of undead.

As well as upgrading their weapons, players will be able to find field upgrades, perks, and support equipment to aid in their fight. If you’ve ever wanted to see a horde of zombies mown down by a Chopper Gunner, now’s your chance.

Possibly the biggest addition to the game mode is the option to exfiltrate if the horde gets too much. Call in a chopper to escape the bunker, but be warned: the zombies will be “dialled up to 11.”