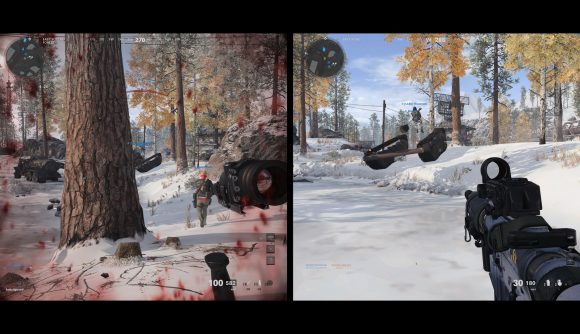 Call of Duty: Black Ops Cold War launched with a split-screen mode for both online multiplayer and zombies, but despite several patches here and there since launch, Treyarch still hasn’t ironed out all the issues. In fact, players now face the prospect of playing on half-rendered maps with armless operators if they decide to venture online locally with a friend.

The “visual issues” which the studio is apparently investigating, are usually triggered after the first game. When players then load into the next game and select their chosen loadout, they’re greeted with a floating gun and a partially rendered map. Long-range scopes are usually invisible or have the reticles removed, making sniping near impossible.

The problems also affect the environment around the players too. Objects fail to load in entirely, textures glitch, and some enemies appear invisible to the split-screen players. We know Black Ops tends to pull in futuristic elements, but having invisible tanks and players is probably taking it a bit too far for a game set in the 80s.

As far as The Loadout understands, there’s no way of manually fixing the problem, which seems to affect all console versions of the game. If you persevere and play through the bugs, it’ll usually go away within a game or two – just expect to be killed in stupid ways.