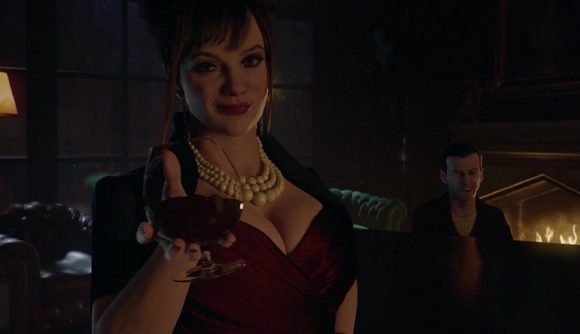 Paradox Interactive has been fairly quiet ever since it delayed Vampire The Masquerade Bloodlines 2 and replaced the original development team, Hardsuit Labs. We’ve not seen or heard much about the development of the game for a while now, but new screenshots shared by the old developers have shed light on the role-playing game’s systems and mechanics for the first time.

The mock-up screenshots come from designer Viktor Blanke (although we have ModeratorForLeaks on Reddit to thank for their discovery). Blanke worked with Paradox and Hardsuit Labs on the game from 2018 to 2020 creating the UI/UX and visual design.

While most of them are just simple gameplay screenshots, two of them show off the menus that initially were in the Hardsuit Labs version of Bloodlines 2. These menus break the masquerade over the game and potentially answer the questions of how deep an RPG Bloodlines 2 was going to be, especially since the studio had never made an RPG before.

From the looks of it, it seemed like there was a lot of depth to what Hardsuit Labs was crafting with a full list of attributes and skills that made up your character. Each of those had five different ranks that supposedly you could level up, allowing you to specialise.

Vampiric disciplines can also be seen, with three Thinblood disciplines displayed, as well as Mentalism, Chiropteran, and Nebulation.

Designer Viktor Blanke has posted some visual design materials from the cancelled Hardsuit Labs version of Vampire: The Masquerade – Bloodlines 2, which he worked on 2018-2020 from GamingLeaksAndRumours

In addition, a mechanic called humanity is present, which governs your hunger for blood and the power needed for certain abilities. This would most likely have been the core mechanic that the game used to encourage you to keep up the masquerade throughout the game, with strong negative effects if you went a long period of time without feeding on someone.

There’s also the Vitae at the top, which is likely to have covered skills and abilities. In addition, two different quest types are shown and another screenshot unveils a different version of that UI, showing off the map and fast travel systems.

Of course, these are just mock-up screenshots, design documents, and other ideas Blanke had for the game, but it does show us what he was working with and what might have been.

You can check out Viktor’s full gallery of the images here.

Right now we don’t know who is working on Bloodlines 2 and Paradox Interactive hasn’t issued an update since last February.