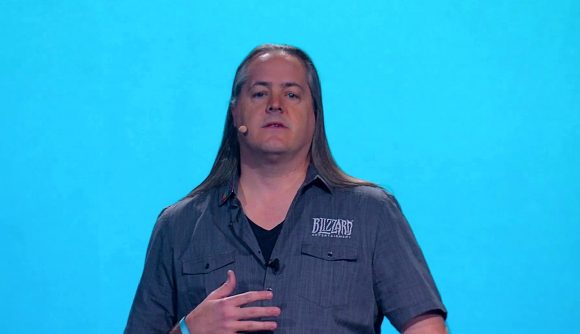 Blizzard Entertainment has announced that its president, J. Allen Brack, is stepping down from his role and leaving the company to “pursue new opportunities”. Brack, who has been leading Blizzard as president since October 2018, will be replaced by two new co-leaders: executive vice president of development, Jen Oneal, and executive vice president and general manager of platform and technology, Mike Ybarra.

Brack’s departure comes less than two weeks after the California Department of Fair Employment and Housing filed a lawsuit against Blizzard’s parent company, Activision Blizzard, alleging after a two-year investigation that the company fostered a “frat boy” culture. In response to the DFEH complaint, Brack said in an internal email to staff that he had been fighting “bro culture” in the industry throughout his career.

The responses to the lawsuit from individuals high up in the Activision Blizzard chain were deemed “unacceptable” and “insulting” by both current and former staff of the company, with thousands signing an open letter criticising the responses and some staging a walkout and protest in front of Blizzard’s headquarters in California.

In what appears to be a direct response to the concerns of employees following the lawsuit’s findings, Blizzard says in its statement announcing Brack’s departure that his replacements, Oneal and Ybarra, have “deep commitment to integrity and inclusivity.”

“Both leaders are deeply committed to all of our employees; to the work ahead to ensure Blizzard is the safest, most welcoming workplace possible for women, and people of any gender, ethnicity, sexual orientation, or background; to upholding and reinforcing our values; and to rebuilding your trust,” the statement reads. “With their many years of industry experience and deep commitment to integrity and inclusivity, Jen and Mike will lead Blizzard with care, compassion, and a dedication to excellence.”

In the same statement, Brack also writes a leaving message saying that the new co-leaders can “accelerate the pace of change” at the company.

“I am confident that Jen Oneal and Mike Ybarra will provide the leadership Blizzard needs to realize its full potential and will accelerate the pace of change. I anticipate they will do so with passion and enthusiasm and that they can be trusted to lead with the highest levels of integrity and commitment to the components of our culture that make Blizzard so special.”