The SWS-10 is the most impressive sniper rifle we’ve had the pleasure of getting our hands on in the game so far. This Finnish bolt-action is a popular pick among the player base – especially when playing Orbital – due to its range and firepower.

As with most bolt-action rifles, the SWS-10 is built for long-range engagements, but with the right attachments saved to your Plus menu, you can turn it into a medium range beast. With that in mind, here’s the best SWS-10 Battlefield 2042 loadout so far for both long and medium range.

If you’re planning on camping a rooftop overlooking your team’s objective, this SWS-10 Battlefield 2042 loadout is perfect for you.

The SBD 10x is the sight with the highest zoom, so that’s a must for your default loadout. You’ll have to factor in bullet drop when you’re sniping enemies at long range, but if you’re a seasoned sniper, you won’t need us to tell you that. The Raven 4x is good to have as an additional option on your Plus menu just in case you get pushed from behind.

For the barrel attachment, we’ve opted for the Extended Barrel as it increases your projectile velocity, allowing you to hit targets at distance. The shortened barrel is great for short-range sniping.

As for the under barrel, well, there’s only one real option: the ADR Bipod. This improves your accuracy while static, helps you control your recoil, and improves your sway stability. As a secondary option, we’d recommend the Masterkey – a mounted shotgun – in case you get caught short.

Recon players are often left to play their own game, so unless you have a dedicated support squad, you’re going to want to tailor your gadget selection to you. Since you might be playing alone, we’d recommend picking an ammo crate to ensure you’re always well stocked up when in the field. 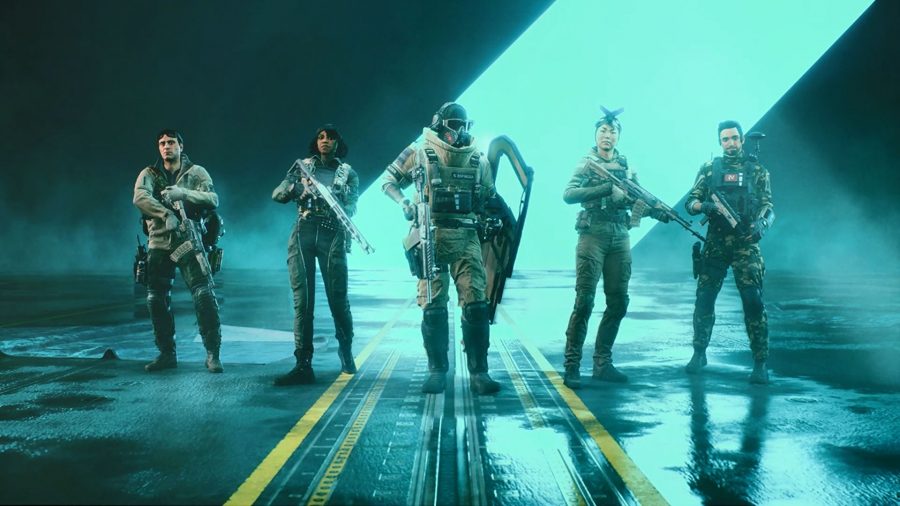 Battlefield 2042 specialists are no longer linked to classes, but they do all have specific builds that might suit certain weaponry compared to others. For players looking to get the best out of the SWS-10, we’d recommend playing Casper or Ji-Soo Paik.

Casper comes with a Recon Drone that spots nearby targets for you and your teammates to snipe. His movement sensor also alerts you to approaching enemies.

Ji-Soo Paik’s EMG-X scanner can tell you where your enemies are hiding – even behind cover – and her threat perception means you’ll automatically be shown where you’re being tagged from.

These two specialists are by far the best suited to recon players, but which one you pick depends on your playstyle.

The sheer firepower of the SWS-10 means that it is undoubtedly one of the best Battlefield 2042 guns in the game – something that’s not going to change.