The year is 2042, the world is experiencing extreme weather shifts, and factions all over the world are fighting against one another. You’d think that in that time, the nature of warfare would shift – but you’re wrong. Military insurgents here use adaptations of the trusty UMP-45, in the form of the best PBX-45 Battlefield 2042 loadout.

The PBX-45 looks a hell of a lot like the UMP-45, often a favoured SMG in competitive FPS games, but it’s a tad different. This submachine gun is based on an AR-15, but uses UMP mags, essentially making it an SMG that’s capable of doing damage at medium and short range.

It’s a cracking little gun for those of you looking to top the post-match leaderboard, but how do you set it up for success? Here’s our best PBX-45 Battlefield 2042 loadout that’ll see you tearing through enemies, earning you a number of ribbons in the process.

As mentioned, the PBX-45 can be adapted for medium-range engagements, but it works best when used up close and personal. For the best PBX-45 Battlefield 2042 loadout, we’d recommend using the K8 Holo sight. The Bravo 3X is a good option to have on your Plus menu, particularly if you’re out in the open and you need to switch to targets at range.

The Arcom Tactical Muzzle Brake helps you with the vertical recoil control, which is a must when you’re using the gun up close. The Extended Barrel is a great second option as it increases the PBX’s bullet velocity, increasing the gun’s firepower, range, and accuracy. Paired with the 3X scope, you’ll be able to contest objectives at range.

As for the ammunition, Standard Issue / Extended Mag High-Power is a must. You’ll have plenty of ammo to sustain you through fights, but when things get interesting, slap the Close Quarter rounds in.

Lastly, the Rattlesnake Light Grip is the perfect attachment for the PBX-45, helping stabilize recoil when moving. This has more benefits than the Flashlight, which will only blind enemies in close-quarters situations. For a secondary, we’d recommend the LS-1 Laser Sight which will help you with hip fire accuracy. 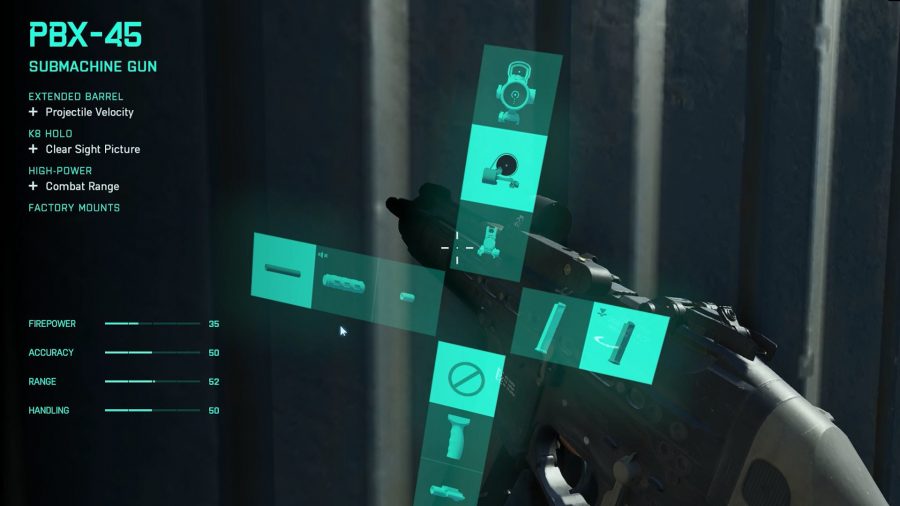 Now you know what attachments you’ll need, you might be wondering about what gadget you should use with this PBX-45 loadout. Well, we believe the IBA Armour Plate is the best option, as it will give you a little bit more protection in close fights.

Any gadget is viable with this build though, so pick whatever works for you – and your team.

Battlefield 2042 specialists all have their own unique gadgets and traits that make them dangerous in the field. For this PBX-45 Battlefield 2042 loadout, any of the Specialists will work, but we recommend picking Falck, Dozer, and MacKay.

Falck is the true support specialist with gadgets that can help heal her allies, Dozer has a shield that’ll protect him from incoming projectiles, and Mackay’s Nimble trait allows him to move quicker while aiming down sights.

There’s our best PBX-45 Battlefield 2042 loadout in full. Hopefully you’ll have a new loadout that’ll see you through multiple rounds of All-Out Warfare and Hazard Zone. Since it’s one of the best Battlefield 2042 guns, we’re confident it’ll form part of your strategy for months to come.