Have you just unlocked the MP9 and you’re wondering what attachments you’ll need to stick on it to make it work? Have no fear, we’ve got the best MP9 Battlefield 2042 loadout right here.

The Swiss MP9 is a small 9mm submachine gun that is built for close-quarters engagements. While it comes with a ton of attachments, you’ll struggle to make this gun effective at medium to long-range, so bear that in mind if you’re playing on a map like Renewal. For that reason, the MP9 doesn’t land a place on our best Battlefield 2042 guns list, but it’s still worth using if you’re going from point to point.

That’s because, like in Battlefield Hardline, the MP9 is a compact weapon similar to an automatic secondary that can blitz through enemies in a few well-timed bursts. If you’re looking to replicate that success, read on for the best MP9 Battlefield 2042 loadout, complete with our recommendations for attachments, gadgets, and specialists.

Right now, the MP9 has far more range than it should have and many players are turning to it to combat the PP-29 meta. Since the gun’s recoil pattern is fairly easy to master and there doesn’t seem to be any problems connected to bloom, building the best MP9 Battlefield 2042 loadout isn’t a bad idea.

For the sight, we’ve opted for the DD Holo since it gives you the best visibility of targets ahead. You can opt for something with a bit more range, but this gun is better used up close.

To help you with the firepower of this gun, the Close Combat / Drum mag is an absolute must for this build. This gives you 51 rounds to play with at any given point, which is more than enough to mow a few people down at the moment.

As for grips, the BCG Light Grip is a must since it helps stabalise your recoil while moving, giving you a bit of a buff in the accuracy department. The LS-1 Laser Sight is another good option – allowing you to control your hip fire.

Last but not least, we’ve picked the Champion Muzzle Break since it assists with vertical recoil control. You’ll see ‘Westie’ in his video below has slapped a Wrapped Suppressor on the gun, which is a great option if you want to stay quiet and off the minimap. 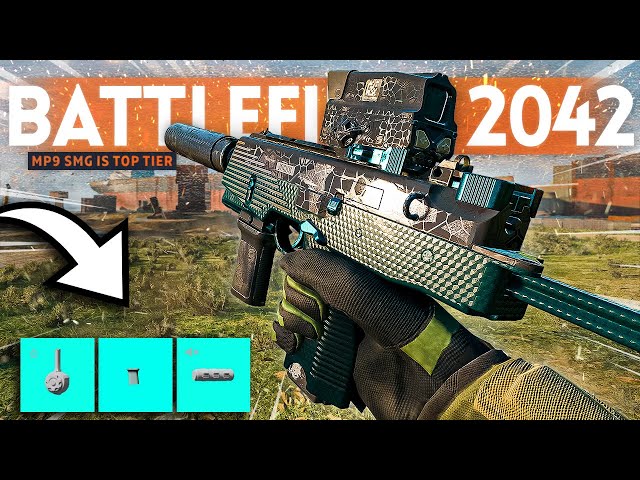 Gadgets these days are all about working out what’s going to help your team out the most. If you’re looking to play a bit selfishly, however, there are a couple of gadgets we’d recommend picking with this loadout. These are the Insertion Point or the Proximity Sensors.

As you’ll know by now, there are ten Battlefield 2042 specialists available in-game, all of which have their own unique gadgets. However, for this loadout, we’d recommend picking a few select specialists.

These are: MacKay, Sundance, and Angel. MacKay’s Nimble trait means he can move faster while he aims down the sights, Sundance’s wingsuit makes them an irresistible choice for attackers, and Angel’s Loadout Crate gives you plenty of options.

So there you have it, our best MP9 Battlefield 2042 loadout. This one requires a fair amount of playtime since the drum mag comes later down the line, but trust us – it’s worth it.