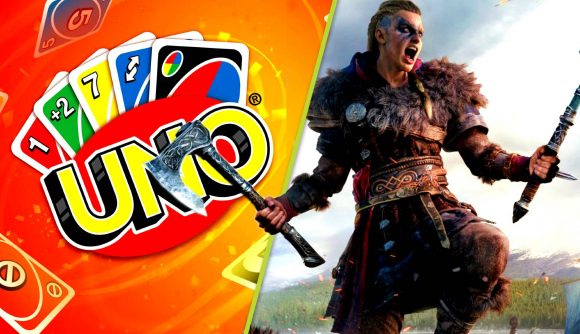 Is UNO slowly becoming more like Fortnite? Well, no – not exactly. However, after introducing Far Cry 6 and Immortals Fenix Rising to the cut-throat card game of UNO, Ubisoft is introducing Eivor Varinsdottir of the Raven Clan through a brand-new Assassin’s Creed Valhalla UNO DLC that’s available right now. It’s more than a cosmetics pack, though – this DLC is going to change the game.

“Keep your friends close, and your enemies closer”, says Eivor in the trailer for the new UNO DLC pack. “For the first time in UNO history, the board is part of the adventure.”

Throughout a game of Valhalla UNO, players will be able to acquire cargo – or steal other player’s cargo – to help them win. With enough cargo, you will be able to get your hands on powerful bonuses like a Viking longship to help you find victory. We don’t know the details of how this will work in-game, but we’re expecting it to be a toggle-able feature.

In addition to this, the Assassin’s Creed Valhalla UNO DLC trailer (which you can watch below) will have a duelling mode where two players can duke it out, with only the strongest Viking with the best hand will triumph.

For the first time in UNO, the board is part of the gameplay: explore, collect resources, battle against other players and play all your cards!

Again, Ubisoft has offered little information into how these new modes will actually work but we can imagine they’d be the perfect way to spice up a traditional game – not that they need much of that, anyway!

If you thought Ubisoft introducing Assassin’s Creed Valhalla to UNO was weird, this is only the latest DLC in a long line of collaborations from the developer. Other Ubisoft titles like Far Cry 6 and Immortals Fenix Rising have been immortalised with themed UNO DLC packs.