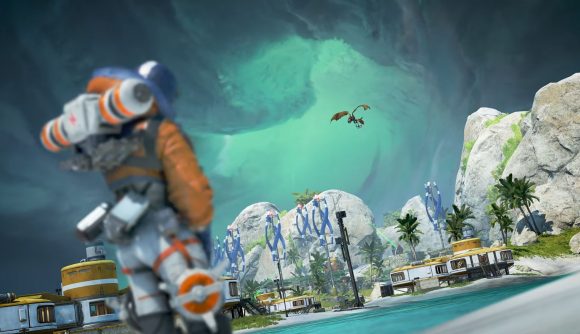 Storm Point, the new Apex Legends map coming to the battle royale in Season 11: Escape, looks to stretch the limits of level design beyond Apex’s previous three maps. Storm Point is the biggest and tallest map in the game – it’s 15% larger than previous record holder World’s Edge, and at its peak, it rises higher than the plane in Kings Canyon.

But was this always the goal from the start of Storm Point’s development, or did the geographical extremities occur naturally throughout the two-year development process? Rodney Reece, the lead level designer for Storm Point (and the brain behind World’s Edge too) says that from the outset he wanted the fourth map to push boundaries.

Speaking to The Loadout, Reece explains that he pushed for so much verticality because he knew at the start of development that the game would eventually have legends with movement-specific abilities. He says the kits of Season 9’s Valkyrie and latest legend Ash were perfect fits for Storm Point’s dizzying heights.

“[Elements] that would have been a little bit more punishing, say in Season 2 or 3, were more viable simply because of the legend makeup [we have now],” Reece says. “So we knew early on that this is something we wanted to attack and try to do.”

Reece also reveals that early versions of the map had Storm Point’s towering mountain even higher than it is now, but this was slightly scaled back to make the map fair and enjoyable for all.

While the height of the map is striking, its large footprint also can’t be ignored. So why did Reece, who had masterminded the previous biggest Apex Legends map, decide to go even bigger?

He says that he wanted to do this to build on a concept he had tried in World’s Edge, which is where named POIs have smaller, unmarked locations next to them that are still viable options for dropping if you don’t want to hot drop. Storm Point has lots of these smaller “spill-off camps”, as Reece describes them, and he needed more space to expand the concept.

During a preview event, Reece and other members of the Respawn team also alluded to how Storm Point will evolve over time. Previous Apex Legends maps are often reworked or updated in a destructive way, but Reece explains in our interview that they will attempt a different approach with the new map.

“Both Kings Canyon and World’s Edge were made before Apex came out,” Reece says. “Apex naturally evolved, and we didn’t know we were ever even going to update these maps. So essentially, we would have to [work out] how we can change things, and what’s healthy to change. 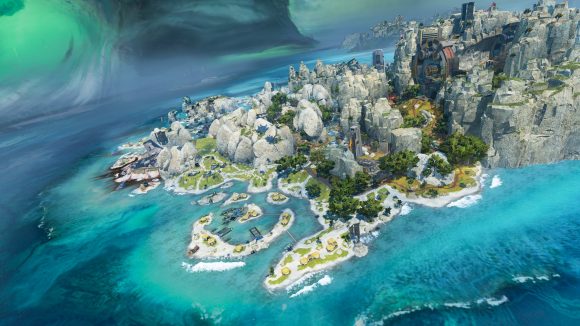 “With Storm Point, since [development on it] actually started a year after Apex came out, we had the benefit of hindsight, knowing that [map updates or reworks] will eventually happen. So [we wanted to] build it in a way where it can naturally grow as opposed to: ‘Oh, this thing blew up and swallowed up this, and this thing replaced it.’ So it’ll be less blowing things up and replacing things [and more] naturally growing things out.”

With plenty of open sea around Storm Point, does “growing out” mean that Apex’s biggest map could get even bigger? Reece says “probably not”, but that it’s “not impossible.”

Instead he intends to see how Storm Point is received, which playstyles and rotations develop in the hands of the community, and if there are any unforeseen choke points or problem areas. While Reece says Respawn already has a few plans for the map, it’s the feedback on these areas that will really influence how Storm Point changes over time.

Keep your eyes peeled for the second part of our interview with Reece, in which we explore why he is confident Storm Point will suit the competitive community and be a great map for Apex Legends’ ranked mode.