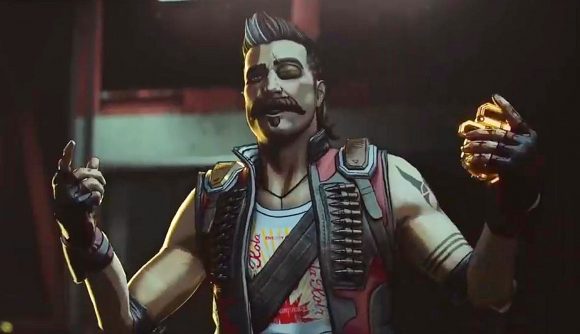 In some cultures, eight is believed to be a lucky number. In Apex Legends, it looks set to be the number of destruction, as Season 8: Mayhem has just been announced. Season 8 sees the addition of Fuse as the battle royale’s sixteenth legend, and his enthusiasm for explosives is sure to cause a stir.

From his Stories from the Outlands lore video, we see that Fuse is a hardened brute who competed as a brawling gladiator on the planet Salvo. Appearing alongside a companion in the video – who Respawn lead writer Amanda Doiron confirms is called Mad Maggie – Fuse declares that he is leaving Salvo to become the first from his planet to join the Apex Games. On hearing this news, a brawl ensues between Fuse and Mags, and the golden grenade that the pair have carried around since childhood is detonated.

In the blast, Fuse loses an arm, but survives and walks away saying: “it’s a lost cause.” The trailer is purely cinematic, so we haven’t got a glimpse at any abilities just yet.

However, artwork on Apex’s official Season 8 page shows Fuse with a replacement metal arm and wielding a massive cannon which is firing what looks like a mini nuke or bomb out of it. Fans of the Fallout franchise will likely grumble that this is merely a re-hashed Fat Man.

We can’t wait to see where Fuse will land in our Apex Legends tier list and how his explosive style will affect the meta.

As well as the new legend, a new weapon is also being added for Season 8 – the 30-30 Repeater. This lever-action rifle will join the loot pool once Apex Season 8 goes live on February 2.

The game’s OG and much-loved map, Kings Canyon, will also be getting a “shake up” as it reenters the casual and competitive map pools for Season 8. According to the Season 8 page, it is now “obliterated” and “Fuse’s entrance has dramatically reshaped” the map.

Some friends support your dreams, others have trouble letting go. Journey to Salvo and see if Fuse makes it to the Apex Games in one piece. pic.twitter.com/gVnbmpazpi

And, as expected, we will be getting a fresh Battle Pass and ranked season for Mayhem.

Expect a lot more details on Kings Canyon’s rework, the new rifle, and Fuse before Season 8 gets underway on February 2.