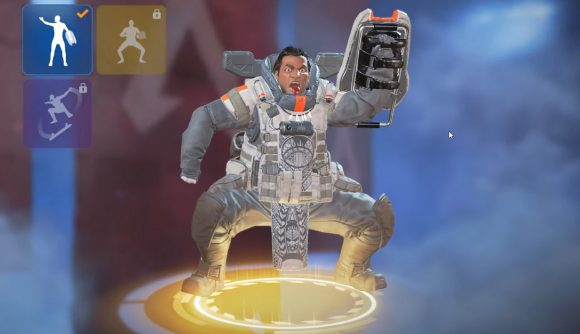 Gibraltar is one of the most likeable members of the Apex Legends roster. As one of the original legends in the game, and thanks to his protective and brotherly nature, Apex players have taken to the gentle giant. Plus, it helps that he’s pretty useful in-game as well – ranking highly on our Apex Legends tier list and featuring in the majority of ALGS teams.

However, as Apex Legends Season 9 introduces ground emotes which further display characters’ personalities – Bloodhound has some raven troubles, and Loba plays golf with Revenant’s head, for instance – Gibraltar’s emote has come under fire. Māori gamer Taikawa ‘Teebagginz_’ Tamati-Elliffe tweeted saying that “[Respawn] better have some form of cultural consultation cos that’s shit if you’re ripping off my proud heritage, identity and culture.”

Many problems arise from the fact that Gibraltar’s heritage is non-specific. Fan wikis say that he is from the Pacific Islands, which his gear seems to draw inspiration from, but that he is not specifically Polynesian, Māori, or Samoan. However, this is not referenced, and Gibraltar’s official description on the EA website only mentions his fictional home world of Solace.

The legendary ground emote is specifically named haka, which directly references the Māori dance, rather than the Samoan siva or Tongan meke, which are entirely different dances from different cultures. However, Respawn writer Tom Casiello tweeted in 2020 that, “Gibraltar’s ancestors are Samoan, Tongan, Hawaiian, Indonesian, and even a little Peruvian through one great great great great great grandpa.”

Tweets and comics only published on social media are often considered canon in Apex Legends, in which case the lack of any Māori heritage suggests that Gibraltar’s new emote is a stereotype of Pacific Island culture. A haka is different from a meke, and there are many different variations of each.

Quick fire !
1. He’s stomping the wrong foot
2. His actions have no meaning
3. Haka is more about the words than the actions
4. He’s not Māori so why’s he doing it ?
5. They use Mataora (facial tattoo) on other skins
6. In his finishers he wields his club backwards https://t.co/5y5jz07buX

However, Phid ‘McAwesome’ Oldfield, who reached out to the EA team on behalf of Teebagginz_, says in a tweet that he has received a “very positive response” from his local EA team, who “raise the issue internally.” He also acknowledges that things may take a couple of days to be discussed.

EA refused to comment on this story when contacted by The Loadout.