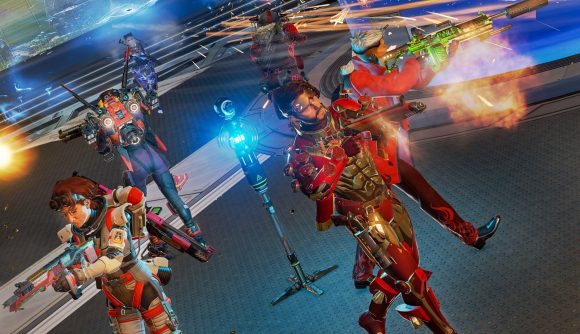 Respawn Entertainment is living up to its name when it comes to Apex Legends’ next limited-time mode; the 9v9, unlimited respawn Control mode. We learned a load of new details about it earlier this week thanks to a media event – including that Lifeline’s ultimate has been tweaked for the mode and that players will have infinite ammo – but we were still left a tad perplexed when it comes to team composition.

In Control, the nine-legend squads are essentially made up of three traditional Apex trios – and yes, that means you can’t nine-stack. In the mode, players can freely swap which legend they play as after death while waiting to be respawned, so you aren’t tied down to just one character per match. In trailer footage for Control, we saw a few instances where two of the same legend were competing on the same team, confirming you do not need nine unique legends on a team. However, Respawn hasn’t explicitly stated just how many of the same legend each team can have.

Could we in theory see nine Pathfinders versus nine Caustics? Is two the maximum, as we saw in trailers? Or, as many have assumed so far, might we be able to have three of the same legend, with each trio being allowed to have one each?

Well after reaching out to Respawn for clarification, The Loadout has learned that it is the latter – you’ll be able to run three of the same legend on your squad of nine, and this is limited to one of each legend per trio, just as it is in regular battle royale matches.

This also means that while you can swap legends throughout a match, if another member of your trio has already locked in the legend you want and won’t give them up, then you’re out of luck.

While Control has been designed as a fun lower-stakes mode where players can more easily and quickly learn different weapons, mechanics, and legends, it seems the scrap for your favourite legend in the pre-game lobby is something that is unavoidable in the Apex universe.