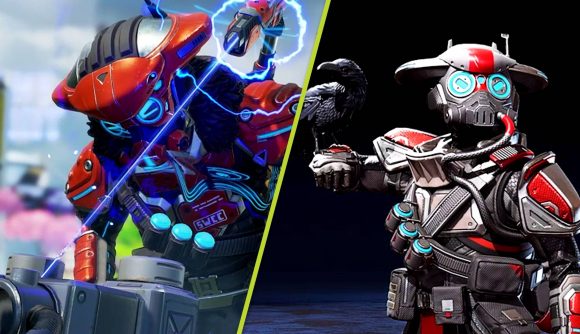 February 23, 2022 Respawn has issued a fix for the Bloodhound prestige skin challenge reset. The headline and copy has been updated to reflect this.

Apex Legends’ Anniversary collection event kicked off earlier this week, but it’s not all happy celebrations for Bloodhound players – despite the fact that they have a new mythic-rarity skin to unlock. The skin’s high value of around $160 is dividing fans on its own, but there are also reports that the skin’s challenge tracking is broken. Thankfully, this issue has been quickly addressed by Respawn Entertainment.

Bloodhound’s new Apex Hunter skin has three tiers of challenges for players to unlock, each offering a different take on the skin’s core design. Tier 1 can be unlocked by completing the Anniversary collection event – the same way you would be able to unlock an heirloom item. Tier 2 and Tier 3, however, are unlocked through in-game challenges. This skin’s challenges are all about dealing damage while playing as Bloodhound.

This sounds straightforward, but a lot of players are struggling to actually complete the challenge. There are multiple reports of the challenge tracking being broken. Cloud9’s Paris ‘StayNaughty’ Gouzoulis tweeted their challenge tracker being stuck at “-1/-1” – a clear issue.

In a Reddit thread, a Respawn developer has acknowledged the issue and revealed that it has been resolved on the dev’s side, but a fix won’t be rolling out to the live version of Apex Legends for “at least a week” – that time has now come.

In patch 1.89, Respawn has issued a fix for the challenge reset issues related to Bloodhound’s evolving prestige skin. In addition to this, the following fixes were made:

We just pushed an update to @playapex that included fixes for the following:
-Bloodhound's Prestige Skin challenges resetting
-Enabling the leaver penalty for Control
-Certain Bloodhound stat trackers not working
-The first of several updates to address the fps issue on consoles

When the issue was first spotted, the same developer that commented on the fix also said that Respawn is “thinking through what options we have to unf*ck this for all of you who lost progress.” At the moment, there is still no word on what amendments are being made.

If you are planning to give the challenge another go, though, check out our Apex Legends weapons tier list for a guide on the best weapons available in-game.