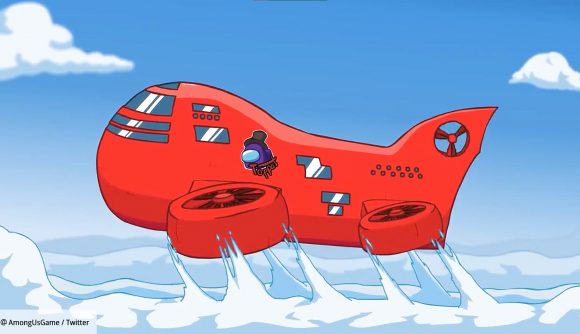 What happens when you take The Beatles’ yellow submarine, slap a fresh red coat of paint onto it, and launch it into the air? Well, according to InnerSloth, you get a brand spanking new Among Us map. Its name? The Airship.

Following its reveal at The Game Awards last night (December 10), the game’s official Twitter account posted the trailer of the new map, which is set to release in early 2021. The final reveal follows months of teasing by the developers, with a picture of The Airship’s cockpit being dropped last month.

The teaser opens with the emergence of the Toppat airship from the clouds. Inside, we are introduced to the map’s major areas: Brig, Cockpit, Electrical, Engine Room, Gap Room, Kitchen – where one unfortunate soul is blasted with an eye laser by a mousachioed impostor – Main Hall, Medical, Meeting Room, Records, Security, Vault, and the Viewing Deck. When each round starts, players will be able to choose an area to start in after a meeting (in this instance either Engine Room, Records, or the Main Hall).

In order to actually get around this floating behemoth, players will have to utilise ladders and floating platforms. The new map will see players partaking in tasks such as emptying the garbage in Medical, or shining one of the Vault’s many treasures. From the trailer we can also see ID code and steering stabilisation tasks in Cockpit, Distributor calibration and shower power diversion tasks in Electrical, a data downloading task in Gap Room, and a wiring task on the Viewing Deck.

Prepare yourselves, crewmates. This upcoming (free!) map will include:
🔹 all new tasks
🔹 your choice of what room to start in
🔹 ladders?!
🔹 and more?

But don't forget about those Impostors lurking around… pic.twitter.com/IU2HJGuyEY

Among Us has undoubtedly been one of this year’s breakout smash hits. And although it has taken a slight dip in viewership over the past couple of months (according to Twitch Tracker), it remains as popular as ever. With the new map looking ship shape, we may soon see its viewership skyrocket yet again.