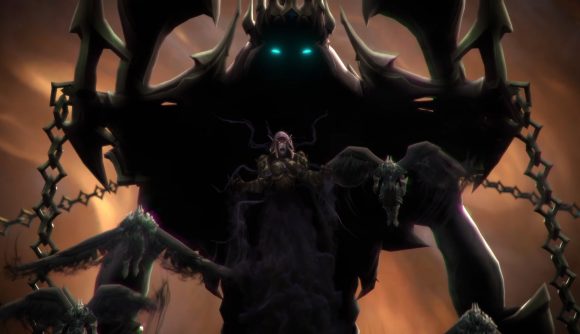 Deathwing is coming to Heroes of the Storm, Warcraft 3: Reforged’s beta is opening up to the public next week, and Hearthstone‘s final set of the year is flying in on a dragon’s back in December. But the biggest Warcraft news of all came from Ion Hazzikostas who unveiled World of Warcraft’s next expansion which will be released next year.

The announcement began with a cinematic showing Sylvanas approaching Icecrown Citadel and ascending the frozen spire to confront Bolvar, who was made the new Lich King way back in Wrath of the Lich King. A battle ensues which ends with Sylvanas chaining Bolvar down so she can take his crown and snap it. The sky splits open casting an orange glow and the subtitle is revealed: Shadowlands.

According to Hazzikostas the Shadowlands represents the afterlife of Azeroth. As such, he promised that players would meet fallen heroes in a land that predates the titans, and delve more into the origin of races like the val’kyr and spirit healers who resurrect you when you die in-game.
Four new zones – Revendreth, Ardenweald, Maldraxxus, and Bastion – were also announced and briefly shown.

A new endgame feature was also promised for the expansion: The ascent up ‘Torghast, Tower of the Damned.’ Like Hearthstone’s recent solo content pivoting towards roguelike modes, Torghast is said to be a highly randomized dungeon.

The trailer for Shadowlands also included information on covenants. There will be at least four covenants with whom players can align, similar to the Aldors and Scryers of The Burning Crusade. Covenants each have at least two active abilities they will impart on players, some of which will be class specific. The narrative of the expansion will heavily center around the story of each covenant, along with a jail for wicked souls called ‘The Maw,’ and Sylvanas. Each covenant has a faction stronghold said to be like class halls from Legion. Covenants will grant players new covenant-specific abilities.

It was confirmed during a later panel that the long-rumored level squish will be taking place either when the expansion is released, or in the patch just prior to its launch. This means that the new maximum level cap will be lowered to 60. Players are said to be able to level from 1-50 in any zone or expansion they choose. The trek from 50-60 will take place in new the new Shadowlands zones.

This panel also elaborated on new mechanics such as ‘soulbinding,’ the process by which players can be become bonded to a soul in the Shadowlands. This system is said to replace the Heart of Azeroth progression system from the current expansion. Grinding for Artifact Power is out.

As for World of Warcraft’s upcoming 15th anniversary, Blizzard is throwing an in-game event to celebrate. It includes a battleground that pays homage to the original version of Alterac Valley and a series of raid challenges against throwback bosses from previous expansions. Those who complete the challenge will receive an Obsidian Worldbreaker mount inspired by Deathwing. Everyone who logs in during the event will receive a Nefarian pet.