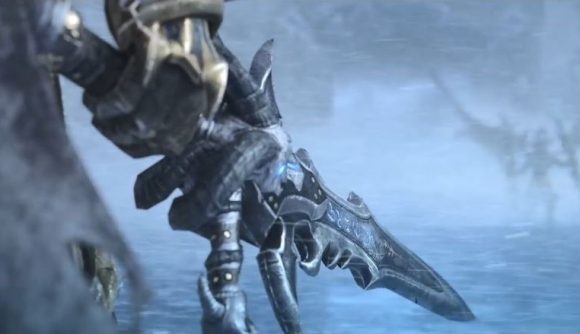 The Warcraft series turns 25-years-old this year. Warcraft III: Reforged, the upcoming remake of the 2002 RTS classic, is another balloon for the party. On the ‘Warcraft III: Reforged Deep Dive’ BlizzCon panel, the host and one of the most accomplished Warcraft III players of all time, Manuel ‘Grubby’ Schenkhuizen, pored over details about the game for 45 minutes.

They not only showed off a sneak preview of the completely remade in-game cutscene from the end of The Frozen Throne’s campaign along with new art and hero models, but they also took time to talk about the material changes. The game is set to not only be a facelift, but to include quality of life changes and new details as well.

Riflemen fire from their rifles now instead of their stomachs. Characters have fingers instead of four-polygon paws. Heroes like the Dreadlord or Paladin have unique arrays of models rather than there being a single model per hero unit.

The world editor is also getting looked over to increase quality of life for map makers. An example that Sciffione gave was the inability in classic Warcraft III to adjust the values of specific individual units via the editor’s GUI-based trigger system. So if a player wanted to create an RPG where one hero gains five health for completing a quest, they would have to find a workaround involving creating duplicates of that hero with incrementally more health. That problem has now been solved with Reforged.

Reforged’s multiplayer will be getting race-based MMR instead of in classic where one’s ladder rank could suffer while attempting to learn a new race. Team-based modes and free-for-all will also be getting separate MMR categories.

Not only will the litany of classic maps be returning, but the team expressed openness to the idea of including more community made maps in the pool and rotating them in and out over time.

It remains to be seen whether this release will reignite Warcraft III’s tournament scene, or if Blizzard will run its own tournament circuit for it similar to the WCS for StarCraft. How the classic games team at Blizzard will handle things like clan creation and the tournament feature from classic is also a dangling question.

Undead, Night Elves, and more game modes are coming soon to the beta. Up to this point, the beta has been iterated upon and updated frequently and the team emphasized during the panel that much of their iteration has resulted from the feedback they have received so far.

The beta’s testing pool will expand on Tuesday to include Blizzcon virtual ticket holders, attendees, and pre-orderers. Open beta is set to launch later this month.