For many of us, games have been a necessary form of escapism over the course of the past year. As I drifted away from the spectacle of thrill-seeking triple-A games, I found a revelation in an innovative iteration on one of the most ubiquitous games in history – Tetris.

Amid a global crisis, Tetris Effect: Connected’s gently addictive co-op mode gave me time to unwind with the game’s immersive audiovisual landscape. More importantly, I formed a connection to my unassuming teammates, who helped me find hope in this difficult time.

Meditative seems like the perfect word to describe Tetsuya Mizuguchi’s spin on the original puzzle game. I’ve practised meditation for a little over two years, and I found my time with Tetris Effect’s single-player Journey mode evoking many of the same feelings as my morning mindfulness routine, allowing my mind drift into a state of pressure-free focus as I rotate tetrominoes and clear lines. Tetris Effect is meditative in the literal sense too – it doesn’t have anything profound to say about life or human nature, instead, it allows the player to enter a state of peace in which to reflect.

It also looks and sounds incredible. Line clears are accompanied by shimmering explosions of light and particles, as the background visuals shift and evolve to match the progressive beats pumped out by the surprisingly diverse soundtrack. I’m not kidding when I say that this is one of the best looking games out there right now, and it looks especially dazzling when viewed on an HDR-enabled display.

It’s lovely stuff, and it’s got Game of the Year awards to prove it. Where things get even more magical though, is in the new multiplayer modes that have been added to the recent Xbox release. There are some competitive modes to get your blood pumping – the likes of Zone Battle and Score Attack, which see you in a race to clear the most lines. But where Tetris Effect: Connected lives up to its legacy is in the titular co-op mode.

Connected sees you paired up with two other players to do galactic battle with 12 bosses based on the zodiac signs. For the most part, you’re playing in isolation, focused on clearing lines from your own board, while your teammates and AI-controlled opponent do the same. The challenge ramps up fast, as the AI begins to mess with you and your board. 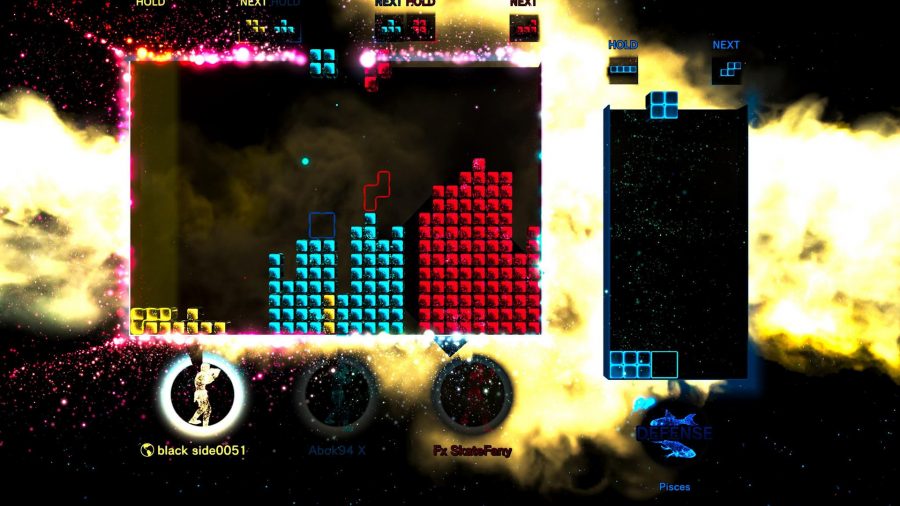 Clear enough lines though and your board will merge with that of your teammates, forming a panoramic board that sort of feels like you’re playing Tetris in an IMAX theatre. Wordlessly, you’ll take turns dropping pieces, working together to clear as many lines as you can in a limited time-frame. All lines cleared are then added to your opponents Tetris board, making good on the ‘battle’ premise. It’s difficult to put into words how euphoric these moments can be – especially when you were close to defeat mere moments prior.

Connected is the feather in the game’s bow, making this upgrade more than worthy of going back for when it rolls out across PlayStation and PC next year. It channels the purest moments of camaraderie from games like Journey and even Death Stranding, all wrapped-up in Tetris Effect’s potent blend of psychedelic visuals and addictive gameplay. There’s no voice chat; indeed, language is entirely redundant here – this is about instinct, logic, and harmonious cooperation. The power fantasies that exist as the pretence for most video games melt away and the only thing that remains is the game – the drive to survive and continue your journey.

2020 has been tough, but for a brief minute while playing Tetris Effect, I’ve found myself floating through an idyllic world in which nothing matters except my tetrominoes and my teammates. Living in lockdown might be isolating, but Tetris Effect has helped me connect with others and reminded me that we all get further when we work together.