Super Smash Bros. Ultimate may no longer be the best-selling game for the Nintendo Switch, but with every new character announced for the DLC comes a new wave of excitement. Just who, out of all of videogames, is going to make it to Smash? It’s one of, if not the biggest roster of characters ever assembled and it’s unenviable to think how the developer balances every single character.

That said, with the exception of Joker, none of the DLC characters have made huge strides at the top of the rankings. Even though the global pandemic has slowed down announcements of new characters to a crawl, the two that have joined the already bulging roster have made very little impact on the overall standings, despite initial concerns about Minecraft Steve’s ability to place blocks in thin air.

But how do each of the 78 characters fare when pitted against each other? Which ones are considered top tier, and which ones are absolute trash? We’ve scoured the internet for not just the stats from tournaments, but the opinions of pro players to come up with a definitive Super Smash Bros. Ultimate tier list.

Here is the Super Smash Bros Ultimate tier list that’s based off EventHubs website. It’s up-to-date as of version 9.0.1 (November 6, 2020) and ranks all DLC characters up to and including Minecraft Steve.

Since Super Smash Bros. Ultimate has an eye-watering 78 characters, we have decided to focus on the top ten characters in the game. 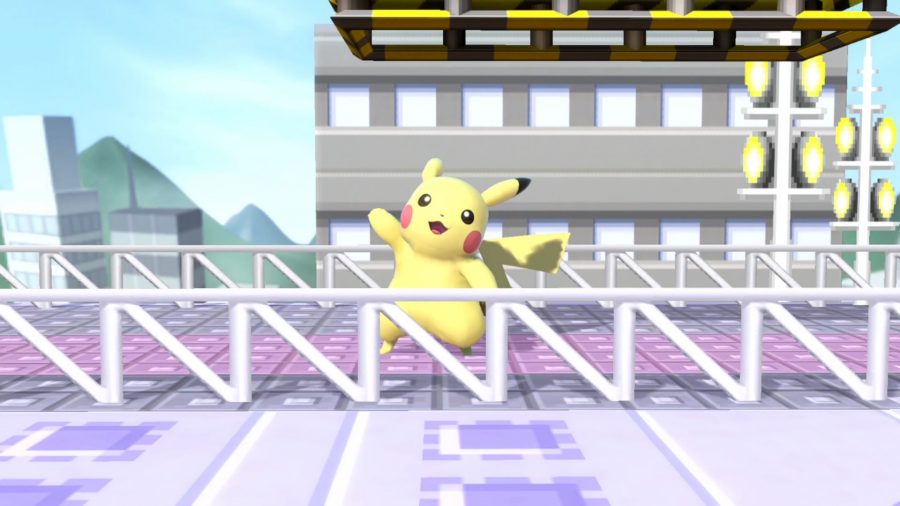 Pikachu is currently the best character in Smash Bros Ultimate. With the recent patch notes, Pikachu’s side+B just got a lot more reliable for causing damage, but it has always contributed to his phenomenal recovery. Hands down, Pikachu’s up+B and side+B have enabled Pokémon’s mascot character to take a risk when pushing for that finishing blow. On top of that, Pikachu’s down+B can be used to be an utter nuisance and camp by the edge.

It’s not just his specials that are good. Pikachu’s aerials down air spikes and has multiple hits, jabs, which are very fast. If you up-throw and then down+B, it can be a brutal one-two punch that takes stocks fast. The down+B can slow down the rate of Pikachu’s descent in the air too, so also contributes to Pikachu’s recovery. He’s also slightly heavier than Peach/Daisy, so won’t get knocked around as much, even though he’s about as quick.

Most Smash players seem to agree that Pikachu has been a top tier fighter for quite some time, and the stats agree. Players are voting Pikachu as the character with the most favourable match ups. 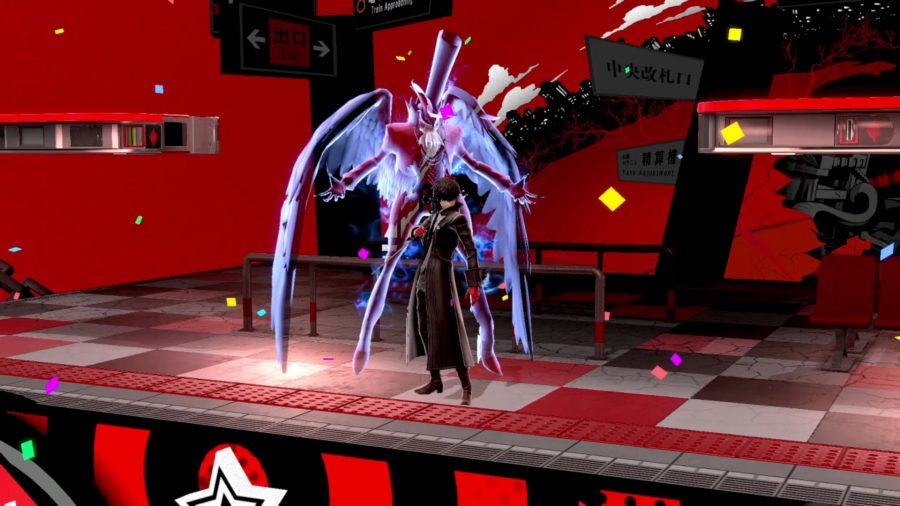 Frankly, Joker is disgusting to play against. He just has so many options to cause pain, but we’re certain that the main issue most players will struggle against is Arsene, Joker’s persona. In the right hands, it’s very easy for a player to go from zero to Arsene in just a few short blows. Then the pain begins.

Joker is extremely quick, with some great mix-ups and combo potential. He has access to some fantastic recovery too. While he is somewhat vulnerable without his persona activated, his regular moves are quick and have combo potential. But when Arsene comes back, you’d better pray to the gods that he doesn’t catch you. 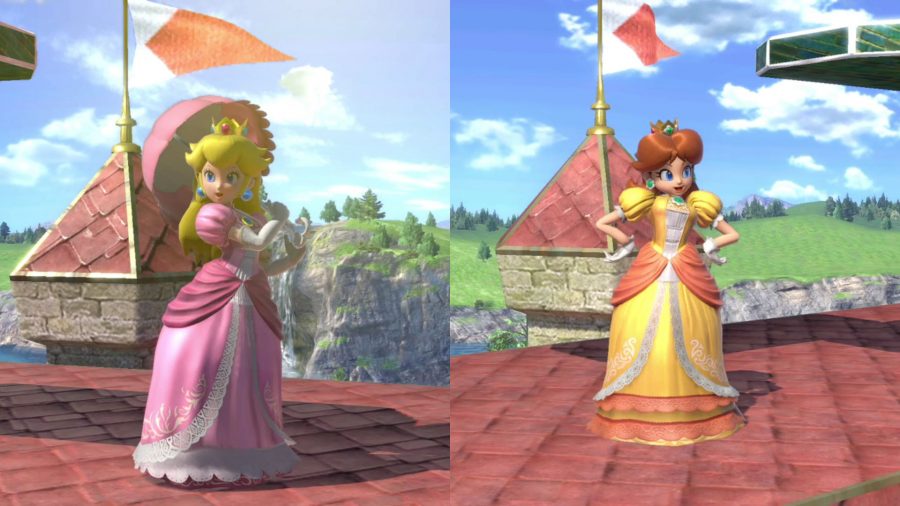 Both Peach and Daisy have featured as being top tier picks for quite some time in Smash Bros Ultimate, and it’s easy to see why. They’re fundamentally the same character with the only real difference being how their turnips work, but let’s face it, you’re yeeting the turnips anywhere other than at recovering enemies.

No, what your game plan aims to do is knock them off to the sides, then using their ability to float for a short time to guard the edge of the stage. If they land a down-aerial while hovering at the edge, you can kiss that stock goodbye. They are definitely not beginner characters and you’ll need to master float cancels to truly get the most out of them, but they’ll both do well against most of the cast. Well, except sword characters that is.: 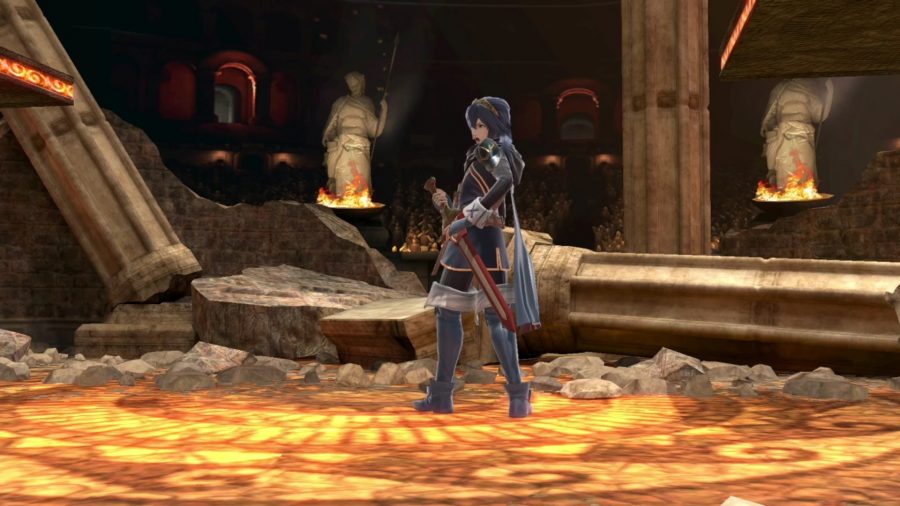 Lucina, the best of the sword characters, is perhaps the most unremarkable character to wield a sword. Funny, we know, but seriously, Lucina is just flat out the best. She has the same quick attacks that Marth has, being an echo fighter variant. But what sets her apart from her ancestor is that she gets none of the drawbacks Marth gets. You see, his attacks are more powerful when hitting with the tip of his sword than up close. Lucina just has flat damage.

The result is that Lucina becomes a lot more reliable at dealing damage. You know exactly how much she hits for, and yet you still get the decent recovery and range that Marth is known for. She has no obvious picks that exploit weaknesses either, so is a safe choice. She’s by no means the best choice overall, but you’re in a good spot should you decide to learn her swordplay. 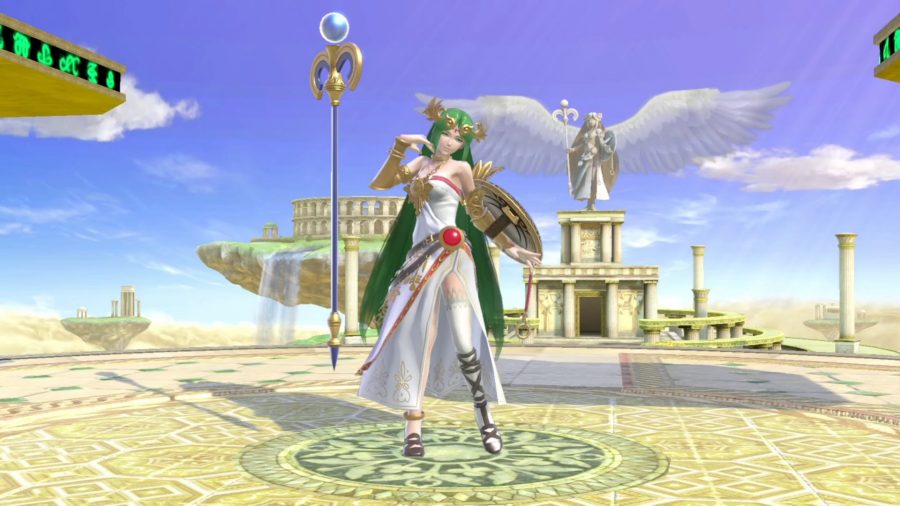 Palutena has the best aerials in the game, with her back-air being very safe, quick, and “bizarrely strong” according to HungryBox. He says that, despite some serious nerfs, Palutena is the most rounded character in the game. Exploding Flame is an extremely versatile move that can be used not only as a recovery tool, but also for edge guarding against recovering enemies, among many other uses.

She also has access to Auto-Reticle, which can be spammed for building pressure with projectiles. Her combo potential is also high, with down throw leading to some great pop-ups. Even her smash attacks are great, with a forward-smash that has no drawback, and a phenomenal anti-air move with her up-smash to send anyone hit by it to the stars. Mastery of the footsies game is your only real hurdle to overcome to use Palutena well. 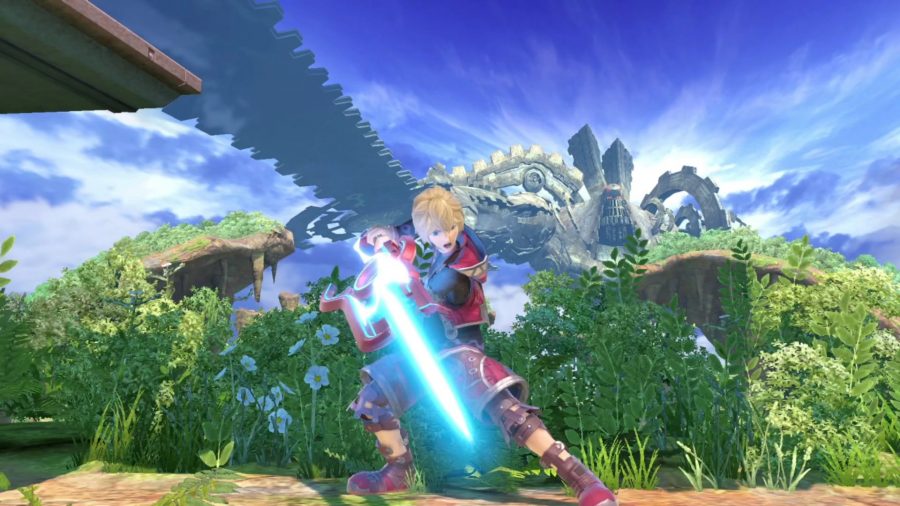 Shulk has the highest damage output in the entire game if you use the Monado Arts correctly. Each one of the five available can be used once per stock, making dealing or avoiding damage a cinch. Each Monado Art turns him into a different character, so you’ll have to keep an eye on which form you’re fighting at any given time, making things utterly stressful as an opponent.

In fact, the only thing that could make Shulk worse is a nerf to his Shield Art. – something that was introduced recently. Beforehand, Shulk players would enable Shield in mid-combo, protecting him as he deals damage with either Buster or Smash Monado Art. Despite this nerf though, he’s still very powerful and one to watch out for when he gets going. 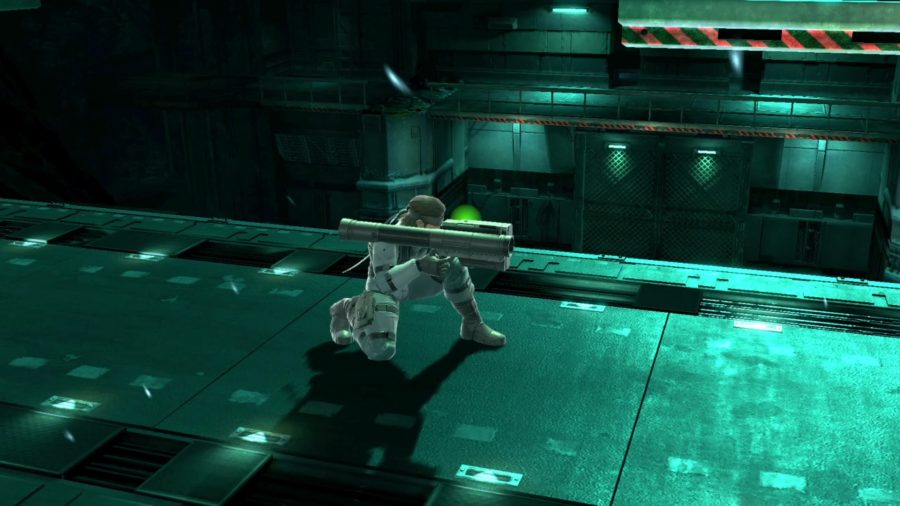 Snake’s game is to hurl out explosives left, right, and centre. By hurling grenades, laying C4, and launching missiles, he can just pile on the pressure on the battlefield, making it very difficult to stay out of harm’s way. His NIKITA missiles are a great option for taking out foes from the edge of the stage, as well as his up-smash attack. Yeah, it has a delay as the rocket flies up, but it can hit enemies who hang onto the edge of the stage for just that little bit too long.

He’s no slouch in the fisticuffs department either, as he has very good tilts, perhaps the best up-tilt in the game, and a recovery that can easily save him from oblivion. He can potentially combo to cause massive damage overall, especially if he yeets his opponent into a C4 charge. 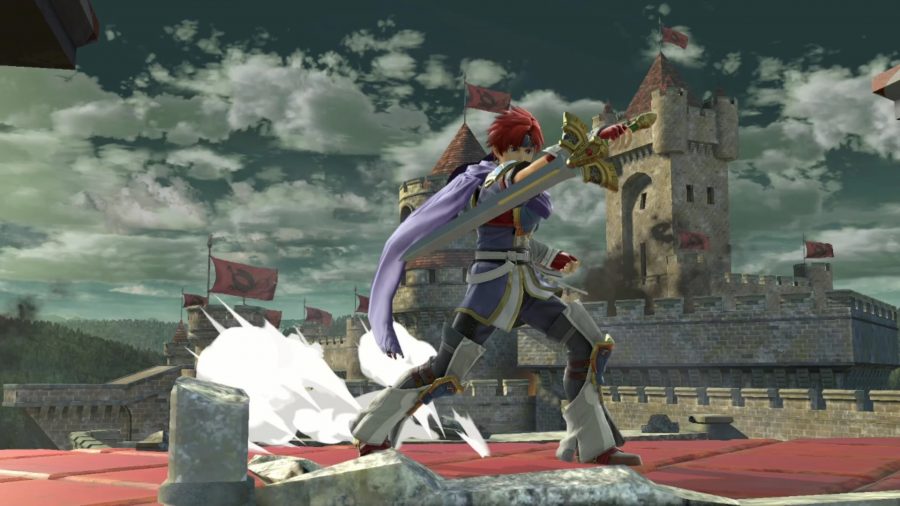 The second of the original sword lads from that there Fire Emblem series, Roy is a slightly slower version of Marth. But while Lucina is more balanced overall, it’s Roy’s raw power that puts him in the top tier. That’s because he deals more damage with his sword the closer he is to the opponent. This takes very little brainpower to do, rather than the precise spacing needed to make Marth a good pick.

Otherwise, he’s basically a more explosive version of Lucina that, while slower, is certainly ranking well in tournaments. Compared to his echo character, Chrom, Roy has better recovery, so that’s why you see him here rather than Chrom. 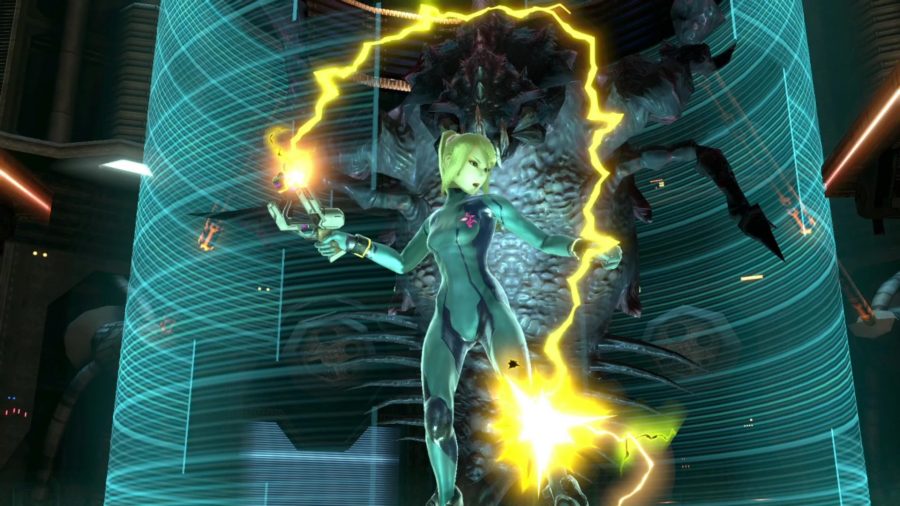 Without the weight of the Chozo armour, Zero Suit Samus is an incredibly powerful and nimble pick. She’ll flip kick you to the stratosphere. She can stun you with several different moves, leading to confirmed KOs. As HungryBox puts it, “if you play against any good Zero Suit Samus online, you’ll see for yourself”.

Her whip can help her recover by latching onto the edge, but it’s also great for grabbing enemies to throw them. Her side+b puts pressure on shields so that they break, stunning the opponent and almost guaranteeing a knockout. She’s been great every game she’s been in. That’s down to having a brilliant move pool and the speed to make it all work. 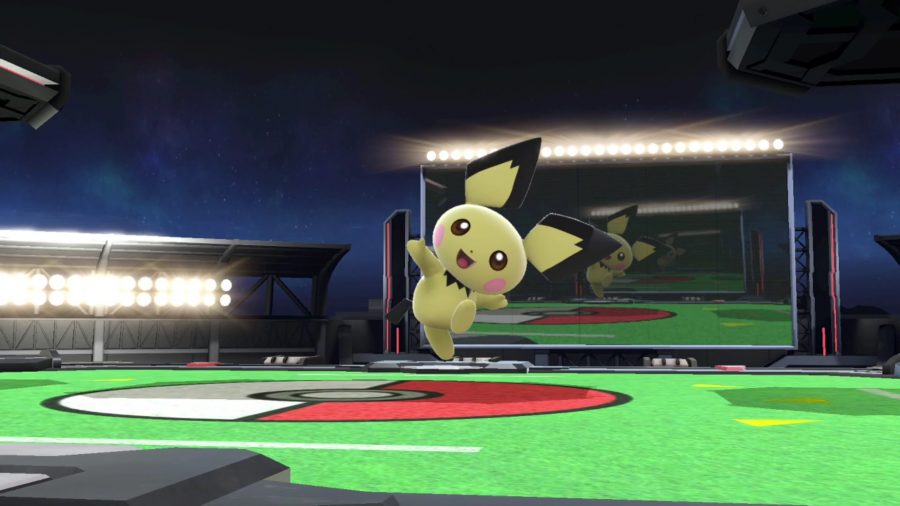 Considered one of the best characters in the game early in Super Smash Bros. Ultimate’s lifespan, this tiny mouse has dropped off a fair bit since then thanks to some big nerfs. That said, Pichu still packs a big punch in a small frame and is incredibly zippy. While the forward tilt was very, very good initially, it got a massive nerf early on, making it nowhere near as frustrating to play against.

That doesn’t mean Pichu has run out of tricks though. Yes, he does hurt himself every time he uses electrical attacks, but he deals an extra chunk of damage compared to Pikachu whenever he hits an enemy. That and he’s basically a smaller, faster Pikachu. In fact, the only thing that’s always been against Pichu is the fact that he’s incredibly light, so you’ll see him fly off the screen more often than his evolved form.

With that, our Super Smash Bros. Ultimate tier list is complete. As new characters appear they will be added and evaluated, and for every patch update there will likely be a couple of changes to which characters are the best, so do check back with us.