Stray may be BlueTwelve Studio’s first game, but it doesn’t show. With a small budget and new team, it could have all gone wrong – but it didn’t. Stray is a fantastic adventure, full of puzzles, unique characters, and thought-provoking story. There are some downfalls to be found though, and the game’s ending leaves a lot to be desired, but this is one stray you’ll want to take home.

After a mishap, cat-you leaves behind your feline friends and finds themself lost in a dystopian city full of robots. You need to make it back to your friends, but how? This is the premise for Stray and what you will spend your eight to ten hours of playtime doing – trying to escape and find your way back to your pack.

The first thing you’ll notice on this adventure, however, is just how well cat-you is rendered and animated. The model of your unnamed felix friend is one of the best animal models I’ve ever seen in a game; the detail in the subtle movements of a cat like breathing in and out, the mouth opening to reveal teeth when meowing, eyes moving, and tail wagging are all captured in such amazing detail that I wouldn’t be surprised if the developers held down a real cat and jammed it into a mocap suit.

It’s clear they’ve gone all-in on cat behaviour as you can sharpen your claws, perch near ledges, drink water, and generally live out your wildest cat fantasies. Want to walk on a piano? How about sticking your face in a bag to find treats only to have it get stuck on your head, reverse your controls, and leave you zooming around in panic trying to get it off? Nothing else plugs you directly into cat life like Stray.

Of course, being a cat means parkouring around the place and fiddling with things. Nudging paint cans, scratching at roller blinds until they stow themselves away and reveal the open window behind – these actions seem inane, but actually make for great signposting for later on puzzles.

Stray was always going to live or die on its worldbuilding

Speaking of puzzles, they’re Stray’s main focus (aside from adventuring, of course). You’ll do things from simple environmental puzzles that require you to paw over boards to cross gaps to working out codes to unlock safes and doors to walking inside barrels to move them around. Very little help is offered and you’re left to work out the answers by yourself. Thankfully, the puzzles – on the whole – are just the right mix of being logical brain-teasers while not being difficult enough to make you scream with rage a la classic adventure games. 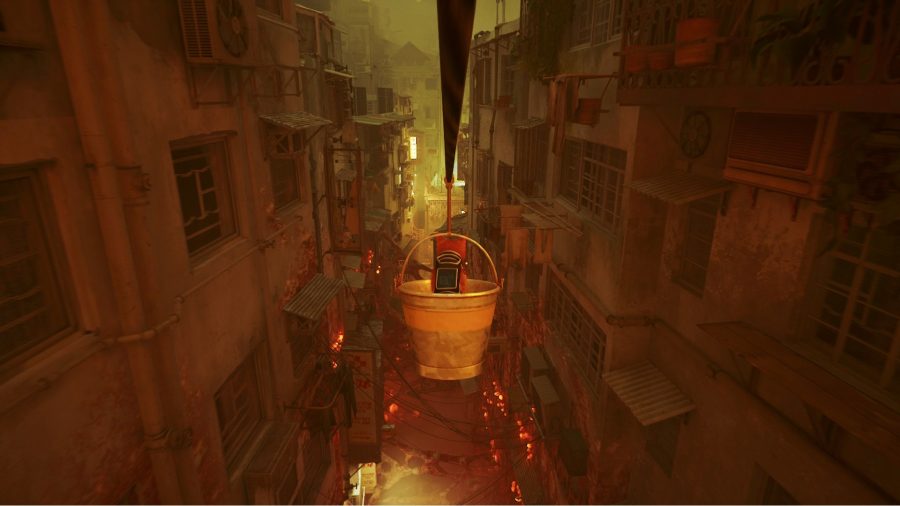 But, look, you’re a cat in a dystopian world, so Stray was always going to live or die on its worldbuilding, which I’m happy to report is excellent. Galloping down the Kowloon Walled City-like alleyways in the Slums and meeting robots, scampering from enemies in long-forgotten sewers, and exploring every nook and cranny of the handful of different areas in Stray never gets old and genuinely makes you want to poke around more and more.

All of this exploring is done with the aid of your drone companion, B-12. This nifty companion is how you converse with robots and read the alien language around you. B-12 helps you interact with technology, like opening electronic doors – something those with paws can’t do. This little robo-drone is also on a journey of its own, and one of the collectibles in-game are ‘memories,’ which unlock B-12 lore. He also fits niftily into your cute cat backpack, so there’s that.

B-12 is a great companion, but it also highlights how well developed all of the characters you meet in Stray actually are. You’ll come across a robot workman who complains that his friend has passed out at a bar, you’ll meet a musician robot who loves playing guitar, and a robot who loves to knit despite robots not being able to feel the cold to name just a few. Your interactions with all of these oddworld denizens also feed back into the main story and its progress, meaning even seemingly side quests matter in the long run. 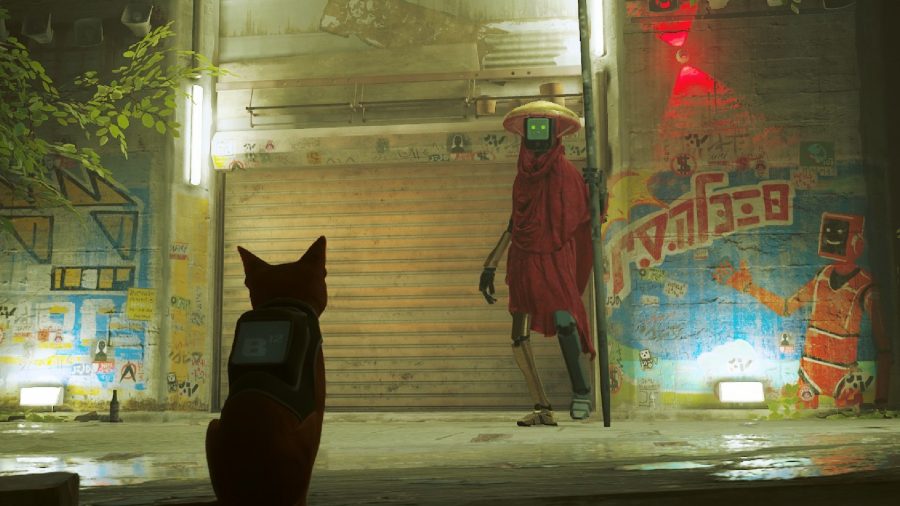 And these examples draw attention to the thoughtfulness around some of the game’s subtext: what makes these exceptionally advanced robots ‘machines’ and not human beings? If a robot complains it is cold or makes music like a person does, then does simply having a mechanical body make them lesser? Throughout the game, robots mimic human hobbies, jobs, and characteristics. Combined with your cat behaviour, you start to wonder what this supposedly humanless world means, and it makes you start pondering things. Existential, cat-like things.

Stray isn’t perfect, however. As the pitter patter of paws beating the concrete gets further along, there are sometimes too many puzzles and too little adventure. The intensity of puzzles mid-game becomes almost overwhelming at points, and you might find yourself wishing for a little more time to recover by watching a cutscene or moving to a new area, rather than having your progress blocked by a series of brain teasers.

There are also sections that require you to out-run and out-battle enemies. There’s a real feeling of the game’s difficulty spiking at these parts, and while these occasions didn’t snag me too much, they are still out of place in a game that signals cutesy relaxed exploring as one of its main draws, and this is bound to catch players who come for a leisurely time out. 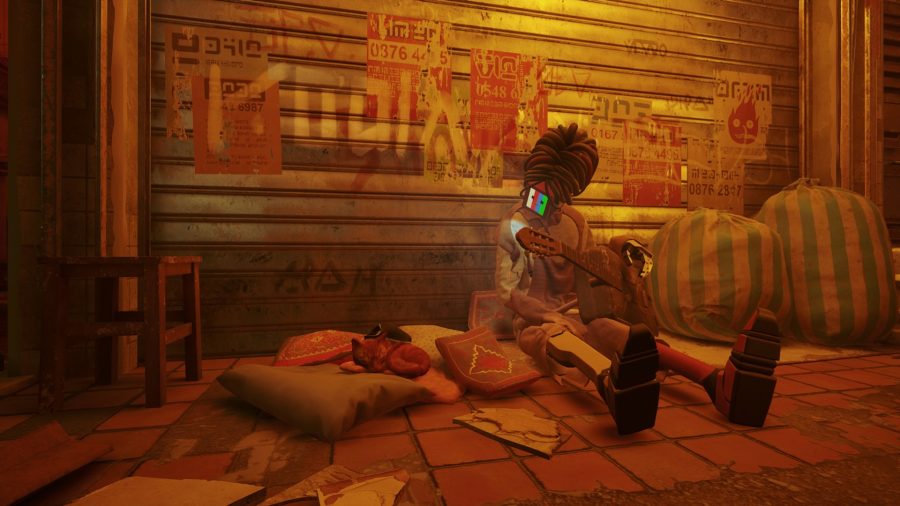 The real blight on an otherwise great game comes with something that can’t be talked about in too much depth: its ending. The whole game is built around your sweet cat protagonist perilously journeying back to their friends, but along the way more questions about what’s happening in Stray’s world crop up as well, piquing your interest more and more. Unfortunately, these aspects are all left on a cliffhanger – except there’s no real tension left. In fact, it’s more like a bait-and-switch; like you did all that work to not find out anything at all.

It’s not a satisfying ending and without a suggestion of a sequel or extra content, Stray’s journey feels well, pretty inconclusive.

That being said, Stray is a game that surpassed my expectations. For fans of games like A Plague Tale Innocence, Stray will be a welcome (and more polished) addition to the adventure-puzzle genre. The catventure does a lot right, and if you’re willing to come to terms with the fact that you likely won’t be satisfied with its lack of an ending, then you will almost certainly enjoy living your best cat life in Stray.

Stray is a brilliant adventure that lets you live out life as a cat in a compelling world with unique characters and well-thought-out puzzles, but its unsatisfactory ending marrs an otherwise great game.