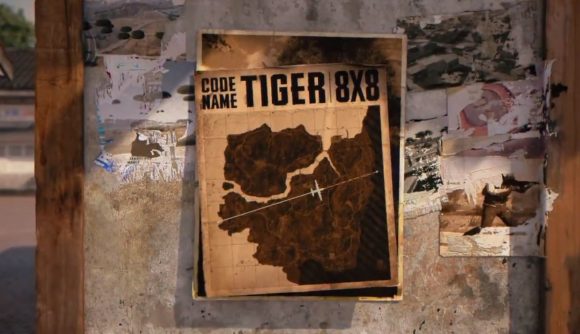 PlayerUnknown’s Battlegrounds is going back to its roots for the next big update with a new map that’s the same size as both Erangel and Miramar.

PUBG fans have known about Taego for a while, but only by its codename Tiger. Details have been pretty few and far between, but now we’ve finally got our first glimpse of it in a teaser video, which you can watch down below.

In short though, it looks like a reversed Erangel. What would be Erangel’s military island is to the north, connected to the main part of Taego by six or seven bridges. A smaller island, to the west of the map, is connected to both parts of the island by two bridges. The poster in the teaser trailer also indicates we’ll see multiple care package drops on the map, as well as big cities and structures, like stadiums.

What’s more interesting, however, is the small, playable area that you can see to the south east of Taego in between a load of cross hatch. Could this be linked to the new revive mechanic similar to Call of Duty: Warzone’s gulag?

PUBG returns to its Battleground roots with the first 8×8 map since Miramar when "Taego" launches in update 12.2. pic.twitter.com/3IwuMBAJYm

Only time will tell. Taego is set to release with update 12.2 hitting PC on July 7 and console July 15.