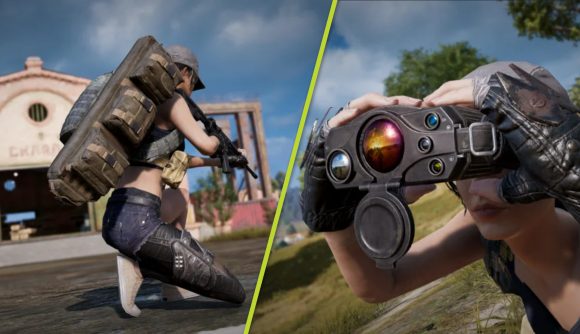 It’s quickly approaching five years since PUBG: Battlegrounds was first released into the wild and to celebrate Krafton is giving us a fresh new update. This update, titled 16.2, adds a whole host of new tactical equipment into the fray, including a new Spotter Scope, which after reading the description sounds like it needs a nerf already.

The spotter scope is basically a set of binoculars that will spawn on every single map in Normal, Custom, Training, and Sandbox modes, and will give you real-time distance to the target you’re aiming at. The scope, which has a magnification level of 4x, will automatically ping anyone within a 1km range and there’s no limit on the number of active markers it can create.

But that’s not all – the spotter scope will keep enemies pinged for /seven seconds/ even if they move behind cover or smoke. This will allow teammates to hone in on enemies, even when they should be theoretically safe.

Although the scope takes up your primary weapon slot and it doesn’t spawn in ranked matches, this new tactical item has the real chance of changing the PUBG meta and many players aren’t happy about it.

A new aim and sound lab has also been added to the training zone so players can become better prepared for the battlefields of Erangel, Miramar, Taego, Karakin, and Haven. The loot drops on Erangel and Miramar have also been increased with this patch, which will hit PC on March 16 and console on March 24.

While there’s more to come from the PUBG team ahead of the fifth anniversary, it’s clear that the team is trying to shake things up with this patch. Whether the new tactical equipment will shake things up a bit too much, though, remains to be seen.