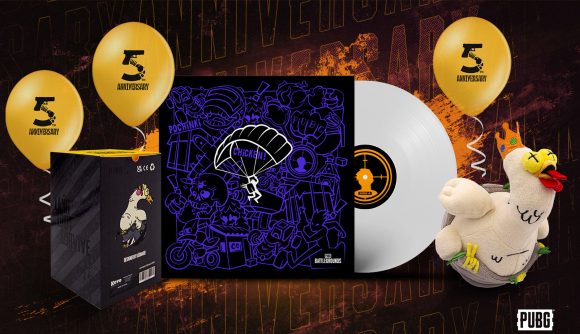 If you’re been playing PUBG: Battlegrounds since the very start, then you’ll know the game is celebrating five years of level three helmets and chicken dinners. While PUBG has certainly changes over the years, one thing hasn’t – and that’s Krafton’s generosity. We’ve teamed up with Krafton to host not one, but two PUBG-themed giveaways.

That means this time around we’ll have four magnificent merch packs to hand out to our loyal UK readers. The first giveaway (of which we have two packs) focuses on the game’s fifth anniversary and contains a limited-edition PUBG vinyl, a chicken plush toy, a gatefold, and lots of party bits like confetti and balloons.

The second giveaway is more esports focused and contains a snapback, a steel water bottle, a mug, and a lanyard with charging cable. We have two of these boxes to giveaway to celebrate the PUBG Nations Cup, which is currently taking place in Bangkok, Thailand. If you’re planning on cheering the United Kingdom to victory, then you’ll want to get your entry in for this one as quickly as possible.

To be in with a chance of winning, you’ll need to complete the actions required by the Gleam widgets below. There are two widgets – one for each giveaway – so make sure you stick your name down for the one you want to win (or both, we’re not your boss).

We don’t need too much from you, but we do need your full name and email address so we can contact you if you’re one of the lucky winners next week. Don’t worry though, we promise we won’t send you spam.

The giveaway for the fifth anniversary merch pack can be found here:

And the PNC giveaway is right here:

Please make sure to read our full terms and conditions before you enter too.