You could make the argument that the jump from the PlayStation 3 to the PlayStation 4 wasn’t that special. Sure, there were some great games on the PS4, but the experience was largely the same, if not a little sharper. With the launch of the PlayStation 5, Sony wants to create a generational leap compared to what we currently have on offer. The PS5 exclusives are one way to do this. The design of the PS5 is something no one could’ve predicted, and its controller follows the same style.

As a result, you won’t be able to take your trusty DualShock 4 controller with you on your new PS5 adventure. That being said, with all the fancy additions to the new DualSense controller, you’ll probably want to stick with the latest and greatest controller available. Sony has been careful to adjust the design of its classic controller though, so it doesn’t make things too awkward for returning players.

This next generation of console gaming promises to create entirely new experiences, and that starts with a brand new controller.

Here’s everything you need to know about the new PS5 DualSense controller:

Sony has decided to scrap the DualShock brand and instead create an entirely new controller: the DualSense. Matching the futuristic theme of the PS5 console , the DualSense features a unique two-toned colour scheme, a larger shape, and a host of additions like adaptive triggers.

The DualSense is noticeably larger and slightly heavier than the DualShock 4 – this design choice was necessary in order to accommodate all of the new features. There’s also a matte textured grip on the back of the controller featuring a design based on the PlayStation’s iconic buttons.

A lot of people expected Sony to stick with its successful controller formula, but it appears the DualSense was designed to make a clear statement. “DualSense marks a radical departure from our previous controller offerings and captures just how strongly we feel about making a generational leap with PS5,” says president of Sony Interactive Entertainment, Jim Ryan on the PlayStation blog. “The new controller, along with the many innovative features in PS5, will be transformative for games.” 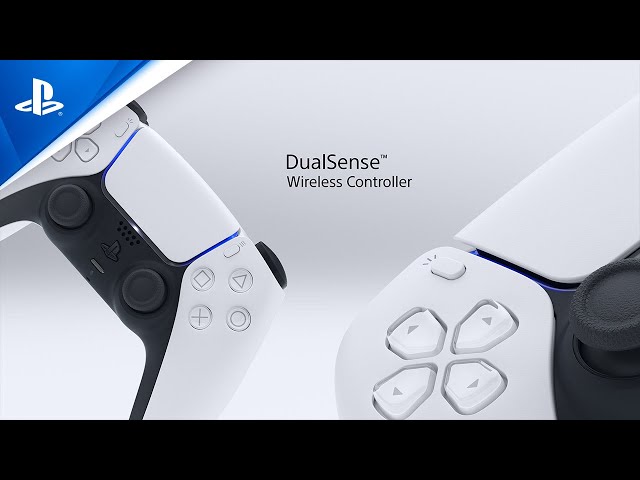 The DualSense retains all of the features introduced in the DualShock 4 (the light bar, touch pad, and share button) but introduces some slight tweaks. The light bar is not as prevalent as before, instead opting for a small streak of light surrounding the touch pad. Sony has renamed the Share button to Create instead, though it still features the same ability to capture screenshots and video clips.

New to the DualSense are the adaptive triggers, introducing haptic feedback to the L2 and R2 buttons of the controller (which can be reduced or disabled). The intention behind this is to allow players to feel the tension of their choices. In order to get the most out of these triggers, the shape of the controller has been adjusted, altering the grip and fine-tuning the angle of the triggers. Another new feature is the built-in microphone array, giving players the option to speak to their friends without having to use a dedicated headset. The button underneath the PlayStation logo lights up in red to indicate it has been muted.

The DualSense’s USB-C port allows the controller to be wired up to anything featuring a USB port, letting you charge from most devices. You can also pair the controller wirelessly to devices with Bluetooth.

When plugged into the PS4, the DualSense is only recognised as a microphone. The light bar on the DualSense turns on to indicate the controller is active when paired via Bluetooth, but nothing happens when you press any of the buttons. Sony could update this in the future to allow players to use their new controller on the old console, but right now this isn’t an option.

The console is just as impressive: The full PlayStation 5 specs list

The DualSense does appear in Windows, though your mileage may vary as Sony’s controllers are not natively supported by the operating system. Surprisingly, the DualSense works perfectly using Android phones, even featuring support for the touch pad as a touchscreen input device.

If you don’t fancy using the controller’s built-in microphone to talk to your friends, the DualSense features a 3.5mm stereo headphone jack, allowing you to use any wired headset.

Sony has confirmed the DualSense will be available on November 12 for $69.99 / £59.99. It looks like some PS5 accessories may be shipping early, so don’t be surprised if some of your pre-orders turn up slightly earlier than your console.