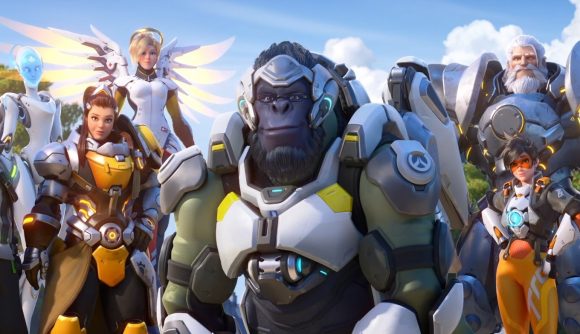 Jeff Kaplan, director of Overwatch, punctuated Blizzcon’s opening ceremony by acknowledging the past week of leaks before finally announcing Overwatch 2.

The announcement began with a cinematic depicting an invasion of Paris by Null Sector omnics. Winston, Mei, and Tracer attempt to repel the enemy forces, and things go well until a building-sized omnic emerges and gravely injures Mei. Just as they start their retreat, Genji shows up in a new costume to make the save along with Reinhardt, an aged-up Brigitte, Echo, and Mercy. The cinematic also features a French cop whose character design is suspiciously detailed. She ultimately went unnamed.

Echo was one of two named newcomers confirmed for the launch of the sequel. She was first introduced in Ashe’s cinematic last year. They also name dropped and briefly showed Sojourn, a Canadian hero with white dreadlocks. All heroes from Overwatch were promised to return.

In fact, not only is each hero from the first game going to be in the sequel, but each new hero will be backwards compatible with the first game as well, along with any new maps added. This, Kaplan says, is to ensure that the player base does not split.

Not much is known about the new maps, but Toronto will be among them. It will be the first new ‘Push’ map, a mode announced alongside the sequel which seems similar to Escort, but with more of a tug-of-war angle. During a panel later in the afternoon they revealed that escorting the objective to the end of the map would result in an instant win, but that this rarely happened in internal testing.

‘Push’ is said to be a new core mode of the game, and will be featured in Overwatch League eventually.

Rio de Janeiro was also named as a forthcoming map, along with being the setting for the first mission of the series’ new single player and co-op content. Other new locales mentioned were Gothenburg and Monte Carlo.

A key aspect of the new missions will be a hero progression system wherein gaining experience with a hero will allow players to choose talents from a tree. Tracer, for instance, can pick between a talent that gives her ‘pulse bomb’ chain reactive explosions when they damage an enemy, or an upgrade to her ‘blink’ ability that deals damage when you pass through enemies.

It was also emphasized that all unlocked cosmetics will be forward compatible with the new game.

Aside from the new art style, graphical flourishes from the updated engine, and non-PvP missions, it seems as though Overwatch and Overwatch 2 will be receiving most, if not all, of the same content.

As for when Overwatch 2 is coming out, that seems to still be quite a way off. During a panel the team mentioned they would be going relatively radio silent for the foreseeable future. They did say that Overwatch would continue to be updated in the meantime.