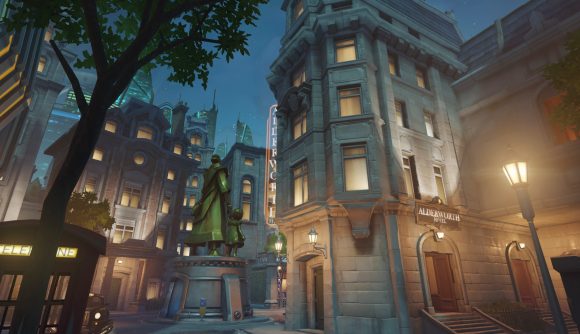 Minecraft and Overwatch – two very different games but brilliant in their own way. One lets your creativity thrive in a fully mouldable world while the other tests your FPS skills in a polished action experience. Very different, but somehow one fan has managed to slot the two games together perfectly by creating King’s Row in Minecraft.

King’s Row is a take on a futuristic central London where your teams battle around a red double-decker bus, pass Big Ben, and hide behind a levitating black cab, all emulating what England may be like in the Overwatch timeline. Reddit user DDoom3099 makes sure no detail is too small to include in their interpretation of the hybrid map.

You can see them start out in the giant attacking spawn room with the chandelier and gothic architecture before running out to see the first choke point on the map. They pass by the empty shops, a tactically placed red bus, before strolling past the golden statue of Mondatta, the omnic monk assassinated by Widowmaker.

Illuminated up above is a gorgeous interpretation of Big Ben over the starting point of the payload. DDoom3099 then makes their way down to the Defender’s spawn room which is another interpretation of what the London Underground would look like before the tour finishes.

I made King’s Row in Minecraft from r/Overwatch

It’s unclear if they made Kings Row all the way down to the last objective, but even without that this creation is really impressive and, as someone who has spent a lot of time playing this map, scarily accurate. Maybe I should try creating Numbani myself, or perhaps I should leave Minecraft to the professionals.