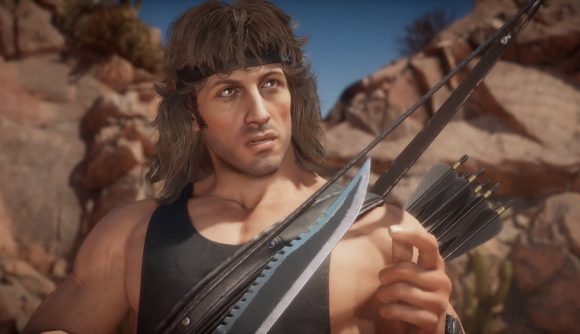 Are you willing to test your might or are you just a weak, pathetic fool? Well, thanks to our friends over at Warner Brothers, you have the chance to find out right here, right now.

To celebrate the release of Mortal Kombat Legends: Battle of the Realms on Blu-Ray on August 30, we’ve teamed up with the studio to give three lucky readers in the United Kingdom copies of both the film and Mortal Kombat 11 Ultimate on PS5.

In case you’ve not seen the film, it’s the highly-anticipated follow up to Mortal Kombat Legends: Scorpion’s Revenge. In it, the heroes are besieged by the enemy forces of Shao Khan, forcing Raiden and his team of warriors into a deal to compete in a final Mortal Kombat that’ll determine the fate of the realms. From there, these fighters travel to Outworld to defend Earthrealm, and Scorpion must find the ancient Kamidogu before it’s used to resurrect the One Being.

Sounds hectic, right? It is, but it’s a cracking film directed by Ethan Spaulding and starring Joel McHale and Jennifer Carpenter, and one you should absolutely have in your collection.

To be in with a shot of winning a Blu-Ray and game bundle, answer the Mortal Kombat Legends question and complete the actions required via the Gleam widget below. We don’t need too much from you, but we do need your full name and email address so we can contact you if you’re one of the lucky winners next week. Don’t worry though, we promise we won’t send you spam.

You’re also going to want to check out our full terms and conditions before you enter here. Good luck!