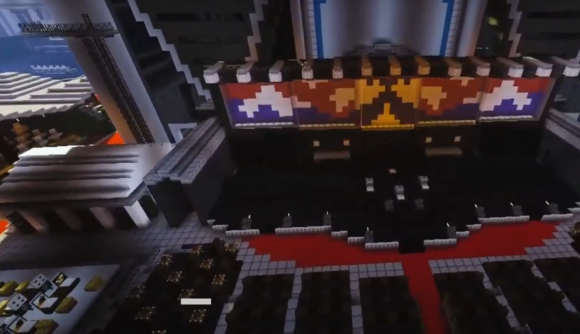 One of the biggest adjustments gaming is having to make this year is the lack of events. We’re still getting lots and lots (and lots and lots…) of online shows, but they don’t quite capture the same feeling. As the start of tonight’s Gamescom show draws closer, it’s natural that you might feel like you’re missing out once again; if that’s the case, you’ll want to try the next best thing.

Creative Social Agency Kairos Media has built the entire Gamescom event in Minecraft, which might help you feel a little bit closer to the real thing. Built in just under two weeks, the playable map consists of a main entrance, two side entrances, and one central hall, surrounded by two open-air ‘fields’ and four halls on each corner.

Everything is included, from stands and stages, to restrooms, info booths, food stands, and even the emergency exits. Of course, it wouldn’t quite be Gamescom without a main stage either.

“For those that attend every year and are going to miss that physical aspect of Gamescom, or those that have never attended and wish they could, we wanted to create a new experience in a virtual world,” Kairos Media’s CEO Mike Craddock says, “Minecraft is unlimited when it comes to scale and was, without doubt, the only game that would allow us to recreate the event, ensuring the detail we wanted to bring to life wasn’t lost. We wanted to allow the public to explore a virtual Gamescom alongside the digital event this year that we’re very much looking forward to.”

YouTuber ‘SeaPeeKay’, who has over half a million subscribers, delivered a walkthrough of the event. The map is downloadable and players can interact with each of the aspects,  including viewing the virtual world from a birds eye view, demonstrating the sheer size of the annual trade-fair.

This year has been less ‘E3’ and more ‘three months’, but this could help offer a bit of variety to just watching every show from a computer screen. You can even position yourself up on the main stage and pretend you’re debuting your new AAA set to make you millions, if you fancy it.