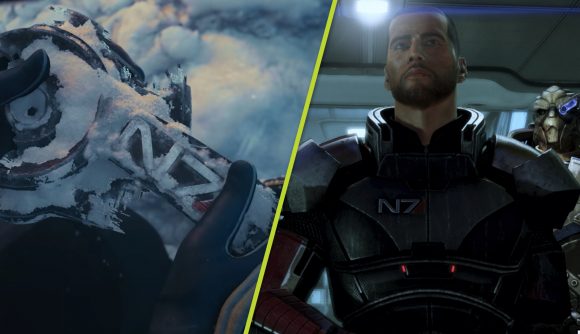 BioWare may have just given fans of the Mass Effect franchise a major spoiler in regards to Shepard’s whereabouts and the future of the Mass Effect universe. This leak comes from none other than Gear BioWare – BioWare’s official merchandise store.

The leak appeared on a lithograph poster – showcasing a Geth crater, a downed ship, and a group of characters – that is being sold on the Gear BioWare website. The poster is the same image that was used to tease that Mass Effect was going to be making a triumphant return and it appears that the characters are going to be key in the next instalment of Mass Effect.

The original description for the poster has since been changed, but thankfully ComicBook has managed to grab the original posting it for all to see. The lithograph is said to house five mysteries for fans to uncover, but for the most part, these fans believe they have found them all. So there isn’t much interest in the lithograph itself – unless you want a cool piece to hang on the wall.

The juicy part that comes from the original description, reads differently from what it does now. One line read as follows “Shepard’s final quest may have ended the threat of the Reapers but at great cost including Earth itself”. This line has now been changed, deleting it completely – Mike Gamble has responded to this on Twitter, saying it was simply a mistake.

Yeah, that was a mistake. Fixed.

This line, however, definitely insinuates that Shepard chose the Destroy Ending within Mass Effect 3, wiping out the reapers once and for all, as well as all other artificial life – so that is bye-bye Geth and bye-bye EDI. Some fans will be outraged by this, as the whole point of Mass Effect is to make your own choices, creating a unique playthrough for everyone. But the destroy ending is one of the few endings where Shepard being alive is feasible. In the other two endings, he literally gets evaporated – hence why BioWare may make this one canon.

The most important line from the poster description has also been removed, the line originally said “While Shepard and the survivors are left to pick up the pieces, fans are left wondering what’s next”. This line suggests, quite heavily, that Shepard is alive and working with the survivors of the reaper invasion. This is huge in terms of leaks for Mass Effect 5 – a game for which we have had no news in quite some time.

‘MrHulthen’ was also one of the first to break the story over on his YouTube page. MrHulthen is known for creating lots of Mass Effect content, speaking out on possible leaks, and being a reliable source of information for many a Mass Effect fan.

Currently, this is all the information we have on this Mass Effect leak, the description for the poster has been changed drastically, having barely any information left to read.